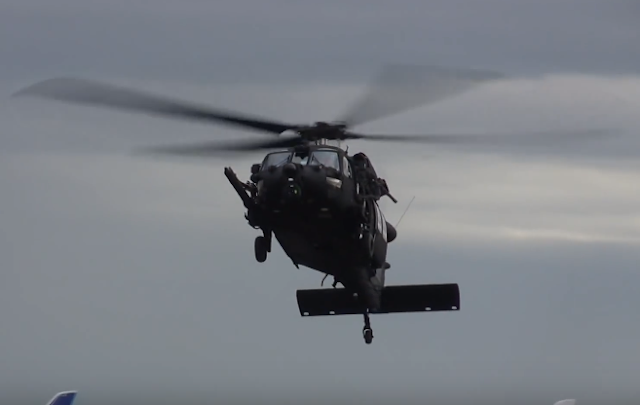 
NASHVILLE, Tenn. — BAE Systems has won a contract to provide the Army with an interim missile warning system for helicopters in a deal worth up to $98 million.

Over 30 different aviation platforms are fielded with CMWS to include all of the Army’s fleet of combat helicopters.

The Army competitively awarded the interim system to BAE through a Quick Reaction Capability (QRC) mechanism that provides ways to bypass the traditional lengthy acquisition process.

BAE’s solution includes its 2-Color Advanced Warning System (2C-AWS), which is the most important improvement in LIMWS in terms of the ability to get better detection of the threat and the [infrared] domain,” Paradis said.

The company developed the system with Leonardo DRS, which is providing the 2-color IR sensor.

Initially the system will go on up to 400 Black Hawks, according to the contract, but there’s a possibility the Army could expand the LIMWS to other platforms before it gets to fielding its future system, the Advanced Threat Detection System (ATDS), Paradis said.

The Army has been working closely to understand emerging threats, from proliferation to actual technical aspects. Additionally, technology is improving in the missile warning system world, and so the service decided it was necessary to field an interim solution ahead of ATDS, according to Col. Jong Lee, the Army’s program manager for Aircraft Survivability Equipment (ASE).

Procuring LIMWS is “important because you want to bring the latest technologies to the aircraft as we work the objective program of record, which is ATDS, because the velocity of the program requirements, we need to have these capabilities in the field in certain parts of the world, not everywhere,” he told Defense News at AAAA. “But that’s the main purpose of the LMWS which is the bridge to the ATDS.”

The Army moved quickly to procure an interim system, going from requirements to a contract award in roughly 200 days.

The request for proposals was released in the summer of 2017 and the Army awarded the contract to BAE in December 2017.

“We are four months into it,” Paradis said, and BAE is on a path to field the first unit equipped in the first quarter of 2020. There is a series of interim milestones to deliver prototypes and the company expects to start testing those prototypes in the third quarter of this year.

The Army has also found a way to convert CMWS to LIMWS in one to two weeks, Lee said, by overlaying the LIMWS fiber on top of the CMWS system, replacing the sensor with a new sensor and replacing the processor with a new processor “essentially minimizing the touch points on the aircraft.”

Typically, a modification like this would take five to nine weeks, he said.

In December 2017, the U.S. Army awarded BAE Systems a contract to develop and deliver its 2C-AWS solution for the LIMWS.  Leonardo DRS had been previously working with BAE Systems to develop a LIMWS QRC offering by providing its Dual Mode Warning Sensor as the basis for the Infra-Red (IR) sensor requirement.

“We are proud to have been entrusted to provide our cutting edge technology sensors to help protect the Army fleet and to enable our Army warfighters to execute their missions and come home safely.” said Shawn Black, Vice President and General Manager of Electro-Optical Infrared Systems at Leonardo DRS.  “We are keenly aware of the increased threats presented to our Army aviators and crews throughout the areas of operation and potential future battlefields.  We understand the advanced detection capabilities required to counter those threats.”

The agreement to provide BAE Systems with the LIMWS QRC IR sensor builds on over two decades of Leonardo DRS technology development and commitment to providing the Army and other U.S. DoD services the most capable solutions to fight and win. Source: leonardodrs.com