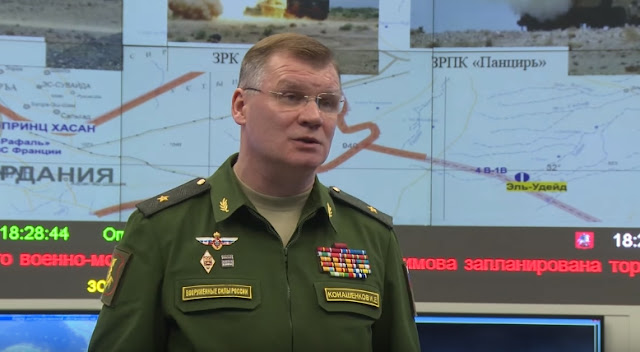 Video with subs at the bottom

As it was promised, the Russian Defence Ministry analyzed effectiveness of missile and bomb strike made by the United States, Great Britain, and France on Syria as well as actions held by Syrian air defence units.

It is to be reminded that on April 14 from 3.42 a.m. to 5.10 a.m. (MSK) different objects of the Syrian Arab Republic were attacked air and sea-based missile carriers of the United States and allies.

The cruise missile strikes were delivered from the areas of the Red Sea, Arabian Gulf, Mediterranean Sea, al-Tanf illegally controlled by the US troops.

According to official statements made by representatives of military departments of the United States, Great Britain, and France all strikes were targeted at three Syrian objects. Therefore, each object was targeted at by 30 and more cruise missiles and air-to-ground missiles.

However, such statements cause great skepticism.

The fact is that all Syrian objects declared as targets are not subsurface ones or well protected by the echeloned air defence system of bunkers.

As it can be clearly seen at space images spread by Western media, these are ordinary buildings on the surface.

It is to be reminded that, for example, warhead of the Tomahawk cruise missile, depending on the type, carries up to half a ton of explosive weight.

Therefore, it was enough not more than 10 missiles for each of the three targets in order to destroy them by any calculation methods, taking into account the triple overlap for their guaranteed destruction.

Survey of the territory of the affected sites in Syrian settlements of Barza and Jaramana confirms these calculations.

As it can be seen on the photograph of the facility in the Barza area, the nature of destruction as a result of a missile strike does not correspond to the scale of destruction from the use of three tens of cruise missiles.

Moreover, the survey of the territory of this and other objects did not reveal either a large number of debris and fragmentations of ammunition, or a corresponding number of impact craters.

Now, there is a real situation.

Real targets of the strikes made by the US, Great Britain, and France on April 14 were not only objects in Barza and Jaramana but also Syrian military objects, including airfields.

It is to be stressed that Soviet designed systems were produced more than 40 years ago.

The government troops also actively used the Russia-made Pantsyr air defence system, which had been received by the SAA earlier.

This system during the anti-aircraft battle showed almost 100 percent efficiency.

In total, the Syrian AD systems eliminated 71 cruise missiles of 103 ones.

Four missiles targeted the Damascus International Airport; 12 missiles – the Al-Dumayr airdrome, all the missiles have been shot down.

18 missiles targeted the Blai airdrome, all the missiles shot down.

12 missiles targeted the Shayrat airbase, all the missiles shot down.

Two missiles targeted the Tiyas airfield, all the missiles shot down.

Five out of nine missiles were shot down targeting the unoccupied Mazzeh airdrome.

Thirteen out of sixteen missiles were shot down targeting the Homs airdrome. There are no heavy destructions.

Almost 30 missiles and corrected air bombs were targeted research-and-development objects located near Barza and Jaramana. Five of them were hit by Syrian AD systems.

It is to be added that no one should be misled by low results made by S-200 air defence missile systems.

This system is primarily designed to hit aircraft. However, this system shot down a fighter of a neighboring country. The aircraft took efforts to intrude airspace of the Syrian Arab Republic.

ruskinovault
Published on Apr 17, 2018
Ministry of Defense of the Russian Federation. Statement on Syria. April 16, 2018