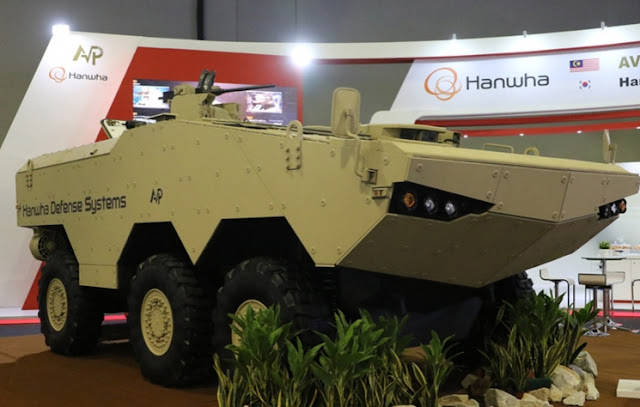 In fact, soon after the exhibition, the giant South Korean defence conglomerate will be conducting a fortnight-long trial with the Malaysian Army for this new-generation vehicle.

The Tigon is a successor to the Black Fox, which was developed by Doosan DST, and which was acquired by the Indonesian Army.

Four different weapon systems are currently on offer for the Tigon: a crew-served 12.7mm machine gun, and three types of RWS ranging from 12.7mm machine gun to 30mm cannon to 90mm gun. The vehicle’s weight varies from 21t to 22t depending on what weapon is selected.

The actual vehicle that will be used for the trials was exhibited on a stand belonging to AVP Engineering, a Malaysian company that has partnered with Hanwha for a number of years.

AVP Engineering specialises in vehicle products. For example, it is currently fulfilling a contract to outfit 500 ambulances based on Toyota chassis for Malaysia’s Ministry of Health, and it has previously supplied Ford F550-based ambulance bodies to the MoD.

The Tigon has a crew of two and it can carry up to nine passengers in the rear compartment. Able to operate at ranges of up to 1,000km, it features a central tyre inflation system.

A 525hp Caterpillar C9.3 turbo-diesel engine coupled to an Allison 4500SP six-speed automatic transmission offers a top road speed of 100km/h and a waterborne speed of 8.5km/h via waterjets. However, the amphibious performance is affected by the weapon system and level of ballistic protection selected by the user.

The Malaysian Army has long held an ambition for a 6x6 APC, especially for the type of United Nations peacekeeping mission that Malaysia is currently performing in Lebanon. There were once reports connecting the Anoa, a 6x6 APC from PT Pindad in Indonesia, to the Malaysian Army, but such a deal never materialised.

Doosan, which was since absorbed by Hanwha, had previously demonstrated the Black Fox to the Malaysian Army.

If the Tigon is selected by Malaysia, Hanwha would make the hull and subsystems while AVP Engineering would outfit the interior as part of a transfer of technology agreement.

The week preceding DSA 2018, Hanwha exhibited a scale model of the Tigo at DefExpo in India. 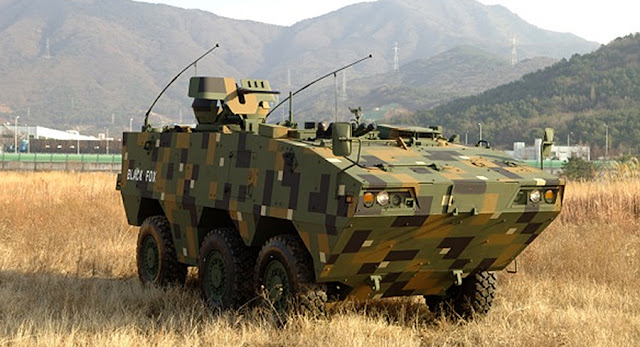 The Black Fox 6x6 was developed entirely using Hanwha Defense Systems own technology and is designed to mount various armament systems and perform multi-purpose tactics. The number of crew varies depending on the vehicle operation purpose but it can hold up to 12 persons. It is designed to extend the protection capability to meet the various requirements of the demanding force. With the powerful 400-horsepower engine, it has outstanding maneuverability.

A fully automatic 7-gear transmission is applied for the easiest possible vehicle operation. 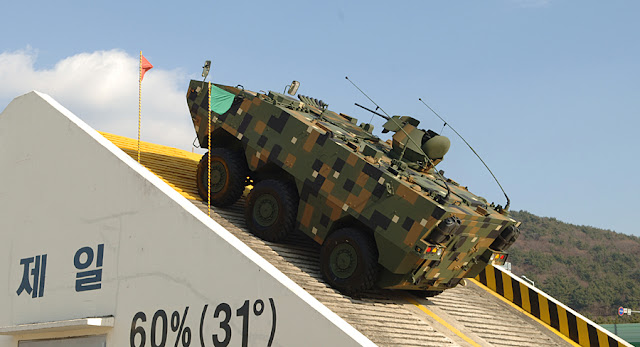 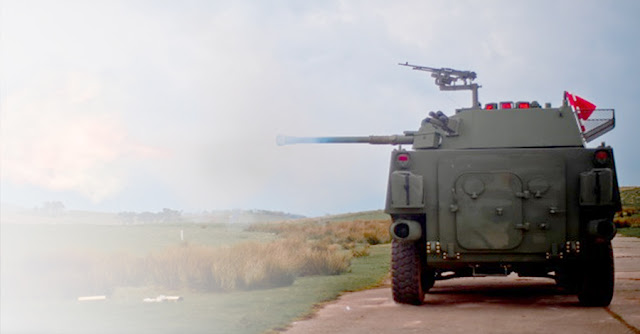 Source: hanwha-defensesystems.co.kr
Posted by Nawapon at 11:22