A World War Might Sound Crazy, but It Could Be America’s Last Act of Desperation 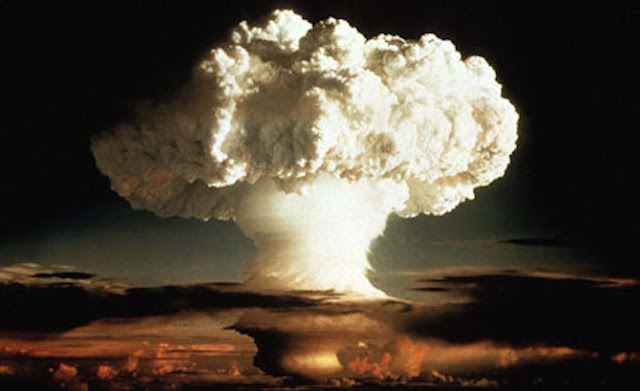 Though some have been warning about the catastrophic potential for a third global conflict for years, it wasn’t until recently that these warnings became more mainstream. The calamitous nature of the violence in Syria — which has one nuclear power defending a government that has been the target of a regime change operation led by the world’s superpower — combined with 2017’s threats of “fire and fury” against another state intently pursuing a nuclear weapons supply of its own, has pushed the issue of a third world war directly into the public discourse.

While certain hotspots throughout the Middle East, Asia, and Eastern Europe (i.e. Ukraine) have seen some notable escalations in the last few years, a direct conflict between Russia and the United States is still yet to emerge. That’s because the idea of a third world war in today’s world is completely insane. If the two countries that currently possess the world’s greatest supplies of nuclear weapons go to war, there may not be a world left for the victors to inhabit after the war is done, thereby making it an unthinkable proposal.

Then again, the U.S. did just recently bomb a significant number of Russian-linked forces in Syria, reportedly killing scores of them. The targets of these air strikes were also predominantly Iranian-backed militias (just in case there weren’t enough state actors already involved in this ongoing conflict).

Speaking of Iran, Donald Trump recently fired Rex Tillerson as secretary of state and immediately appointed CIA director Mike Pompeo to replace him. Pompeo is a notable anti-Iran hawk who will almost certainly go further than Tillerson was ever prepared to go with regard to the Iranian nuclear accord, a deal Pompeo believes is “disastrous.”

There are also reports now emerging that Donald Trump is planning to oust his national security advisor, General H.R. McMaster. McMaster originally replaced anti-Iran war hawk Michael Flynn, but apparently, McMaster’s non-stop allegations against Iran were not enough to please Trump. McMaster was not on board with Trump’s attempt to completely derail the Iranian nuclear deal.

One should bear in mind that when Donald Trump made the decision to strike the Syrian government in April of last year in what amounted to one of the year’s most important and over-publicized geopolitical events, it was McMaster who drew up the strike plan options and presented them to Trump to choose from. If this is a man not hawkish enough for Trump’s administration, his looming removal from the administration is a worrying sign of what’s to come.

Donald Trump’s Nuclear Posture Review entails that, as Katrina Vanden Heuvel noted in an article published in the Washington Post:


“The United States reserves the right to unleash nuclear weapons first in ‘extreme circumstances’ to defend the ‘vital interests’ not only of the United States but also of its ‘allies and partners’ — a total of some 30 countries. ‘Extreme circumstances,’ the review states explicitly, include ‘significant non-nuclear attacks,’ including conventional attacks on ‘allied or partner civilian population or infrastructure.’ The United States also maintains a ‘portion of its nuclear forces’ on daily alert, with the option of launching those forces ‘promptly.’ [emphasis added]

Considering that a former analyst for the Council on Foreign Relations, Micah Zenko, just warned that Pentagon officials are actively searching for a “big war” against Russia and China, the trajectory we are currently on starts to make a lot more sense.

In other parts of the world, we are witnessing a new era of hostilities towards Russia. The debacle taking place in the U.K. right now, which has seen allegations of a Russian chemical attack on British soil, has prompted the U.K., U.S., France, and Germany to band together and condemn Russia for something that hasn’t even been conclusively investigated yet.

After years of constantly being painted as the enemy, Russia just declared via Twitter that a “Cold War II” has begun, and who can blame them?

A third world war might sound crazy, but it is only crazy if we fail to understand the desperation that continues to plague the men in suits who pull the strings guiding American foreign policy. Consider that the Syrian government, with Russian and Iranian backing, has managed to stabilize significant parts of the country despite all odds so that refugees can return home safely. It should be clear that the best way to solve the Syrian crisis is to discontinue America’s regime change policy in Syria and allow the people of Syria to normalize their own lives without Washington’s interference. Yet, after seven years of brutal violence, the U.S. still refuses to admit defeat in Syria. If anything, the U.S. has now officially set its sights on directly combatting Iranian influence in the country, raising the potential for significant escalations.

Maybe, just maybe, the U.S. is that desperate. Apparently, the U.S. has to remain in Syria out of necessity. It cannot afford to sit on the sidelines as Russia re-emerges as the major power broker in the region, eating up all the major contracts coming out of Syria (together with Iran) as it looks to poach American allies left, right, and center.

Additionally, Russia recently warned the U.S. that it will not tolerate Washington’s aggressive attacks on the Syrian government and will respond with strikes of their own should the U.S. military threaten Russian personnel. One should expect that eventually, there will be a point where Russia will no longer allow these attacks to go unanswered.

As America’s power and influence wane, the time will come for both Russia and China to make their mark on the global stage. Just on a side note, it should come as no surprise that Trump’s nominated ambassador to Australia, Adm. Harry Harris, is a known anti-China war hawk who recently warned Congress to prepare for a war with China.

Why should we need to prepare for a war with China? Who talks and thinks like that? A nation on a slow and inevitable decline that cannot refuse to admit defeat in almost any battle theater since World War II, that’s who.