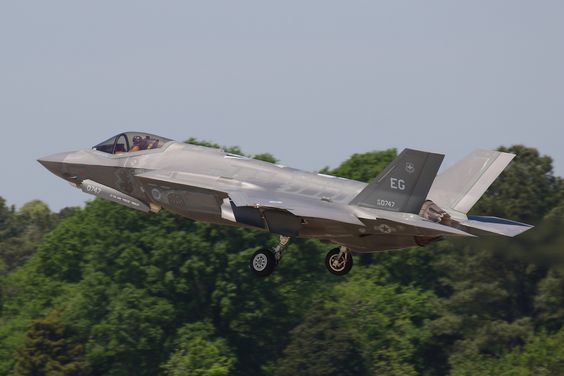 “After years of military modernization, China shows the ability to wage war against Taiwan for the first time since the 1950s. However, with your leadership, it is possible to help Taiwan remain a democracy, free to establish a relationship with China that is not driven by military coercion,” the senators wrote.

An F-35 sale would add to Taiwan’s aging fleet of F-16 Fighting Falcons, which the United States sold the nation in 1993. The older and dwindling F-16s — down from 150 original fighters to 65 field-ready planes — are “not enough to maintain a credible defense” against China, according to the senators.

"The survivability of the F-35B and modern long-range sensors could help Taiwan intercept Chinese missiles, promoting deterrence well into the next decade," they wrote.

But should a F-35B sale be premature, Cornyn and Inhofe suggested that Trump sell Taiwan newer Lockheed F-16Vs.

“If Taiwan's air defense fleet is allowed to degenerate in number and quality, I am concerned that it would be destabilizing and would encourage Chinese aggression to ensue,” they wrote. “Additionally, I am concerned that Taiwan's military weakness and the inability to mount a credible air force would place an undue burden on forward-deployed U.S. forces in North East Asia.”

The issue of selling U.S. fighter jets to Taiwan has been a point of tension between Washington and Beijing for years. The Obama administration in 2012 reversed its long-standing opposition to arming the small island nation with American warplanes, acknowledging that Taiwan's current F-16 fighter fleet would not be able to counter a potential Chinese attack.

The White House's previous policy stance had been that the United States only needed to provide incremental upgrades to the fighters in order for Taiwan to keep the Chinese at bay.

Washington considers Taiwan an ally but has followed an ambiguous official policy in which it formally recognizes the existence of "One China," of which the U.S. considers Taiwan a part. Beijing, meanwhile, claims authority over the island. Under the 1979 Taiwan Relations Act, the United States provides arms to Taipei.

F-35 Sale to Taiwan Not Worth the ‘Risk,’ Experts Warn

As the Trump administration takes an aggressive stance on China, senators push an F-35 Joint Strike Fighter deal with Taiwan.

As the White House pushes tariffs on China for what it calls “unfair trade practices,” two U.S. senators are calling on President Trump to sell F-35 stealth fighters to Taiwan.

“Taiwan has a legitimate requirement to field a modern fighter fleet to address a myriad of defense contingencies,” they wrote in a letter to Trump on Monday. “Therefore, Taiwan is requesting U.S. support in their procurement of the F-35B.”

But while experts say the F-35B is ideally suited for Taiwan’s military, they warn that it could pose more of a risk than a deterrent.

“You would be upping the ante significantly not just between the Taiwanese and Chinese, but between the United States and China,” said John “JV” Venable, a retired fighter pilot who is now an analyst with the Heritage Foundation. “I’m not sure that’s worth the risk for the United States.”

Then there are export control concerns surrounding the F-35’s advanced technology and the logistics network each plane feeds data into.

“You tap into that and you’ve got access to a whole lot more information than logistics,” Venable said of the computer network known as ALIS. “There is word [on the] street that it would be very hard for the Taiwanese to hold the secrets — not because they would give them up willingly, but because of the infiltration of the Chinese into their system.”

And the plane is not cheap to buy, fly, and maintain. An F-35B, the version pushed by Cornyn and Inhofe, currently costs about $123 million each.

“Do the Taiwanese have the wherewithal to buy these planes?” asked Richard Aboulafia, vice president for analysis for the Teal Group, a Virginia-based consulting firm.

If Taiwan could only afford a small batch of F-35s, it would be better off buying high-end air defenses, Venable said.

But from a military perspective, experts say the F-35 is perfectly suited for flying in Taiwan. The plane can take off from short runways and land vertically like a helicopter. That would be important in a war with China, which would likely bomb Taiwan’s airfields preventing traditional jets from taking off.

Pilots consider the F-35B “a very simple airplane to fly” compared to the Harrier, an old fighter jet that can take off and land vertically, Venable said.

The U.S. Marine Corps is buying the lion’s share of the B-model F-35s. The U.K. and Italy are also buying the jet. The planes are largely built by Lockheed Martin in Cornyn’s home state of Texas.

“The survivability of the F-35B, and modern long-range sensors, could help Taiwan intercept Chinese missiles, promoting deterrence well into the next decade,” the senators wrote. “The F-35B would not only provide a modern fifth-generation fighter but would also bolster their capabilities in next-generation warfare.”

The request comes just days after Trump slapped tariffs on Chinese imports partly in response to China’s theft of U.S. intellectual property. China responded to U.S. tariffs on steel and aluminum by taxing imports of some American products.

Arms sales to Taiwan are always a hot-button issue. The Obama administration refused to sell F-16s to Taiwan, opting to upgrade old versions of the fighter jet purchased in 1992 during the George H.W. Bush administration.

Taiwan has 144 F-16s, but fewer than half are battle-ready on any given day, the senators wrote. The upgrades will sideline about 24 jets on a “rolling basis” through 2023. Another 15 of its F-16s are used for training and are based in the United States.

Should the administration decide not to sell F-35s to Taiwan, Cornyn and Inhofe wrote, the U.S. should at least sell them more F-16Vs, the designation given to the jet once it receives a host of upgraded equipment, including a new radar, cockpit display and the ability to fire more modern missiles.

“If Taiwan’s air defense fleet is allowed to degenerate in number and quality, [we are] concerned that it would be destabilizing and would encourage Chinese aggression to ensue,” they wrote.  “Additionally, [we are] concerned that Taiwan’s military weakness and the inability to mount a credible air force would place an undue burden on forward-deployed U.S. forces in North East Asia.”

Venable said selling Taiwan high-end F-16s or F/A-18s are a better option for Taiwan and the U.S. right now.

“For now, I do not see this is a good thing for the United States overall to sell the F-35 to the Taiwanese,” he said. Source: defenseone.com