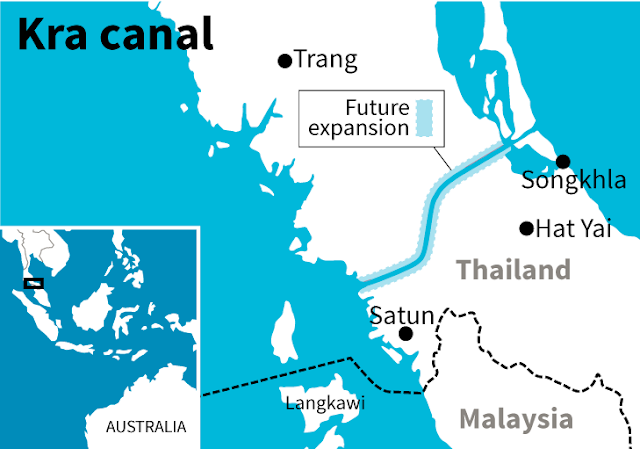 The Kra Canal project connecting the Gulf of Thailand to the Andaman Sea in the South has experienced stops and starts for decades now, with still no strong signs of it moving forward. But one advocacy group of retired military men still cling to the hope it can be done.

For the past two years, the Thai Canal Association (TCA) has upped efforts to persuade Prayut Chan-o-cha's cabinet to finally implement the mega canal plan also known as the "Thai Canal" project.

"Our aim now is to demand the government set up a panel to conduct a feasibility study of the canal, which would be our first step," said former second army region commander Thawatchai Samutsakorn, who now serves as the TCA vice chairman.

He raised the issue in a recent talk with Prime Minister Prayut, who like him graduated from the 12th Class of the Armed Forces Academies Preparatory School and 18th Class of Chulachomklao Royal Military Academy.

However, the prime minister refused to make any promises about the plan.

"I have talked with Gen Prayut several times. He said he has only come to power temporarily so he cannot afford to address the issue," said Gen Thawatchai.

In their talk, he warned Gen Prayut that the failure to implement the project would result in the country's economy taking a step backwards and lagging behind regional players.

"We would eventually be left standing in last place among Asean countries [without the Kra Canal project]," said Gen Thawatchai.......Read rest of article: HERE

After Suez and Panama, Time to Build the Kra Canal!

An inclusive enterprise, the long-term success of the Kra Canal will be also largely determined by the governance of its operations, and, in that matter, Bangkok can certainly find inspirations from existing practices - the Suez Canal Authority (SCA) or the Panama Canal Authority -, but it should also be ready to create a unique governing structure which would take into account contemporary local, regional and international dynamics.

Misconceptions about the nature of China’s re-emergence have produced the “China Threat” discourse, and those who actively cultivate this narrative or simply believe it, will wrongly interpret Beijing’s involvement in the Kra Canal as a threatening projection of Chinese power. One can expect that the U.S. will first use its diplomatic influence and its soft-power to oppose the Kra Canal as much as, at some point, the United Kingdom of Queen Victoria tried to oppose the French initiative in Suez, but one should also remember that in a spirit of openness and inclusiveness Ferdinand de Lesseps was finally able to gain London’s support.

Following open debates and convincing explanations on the collective benefits of the Kra Canal, the U.S. will have to recognize that in an evolving world new initiatives which do not come from the West are not necessarily anti-Western, they are simply the mark of a mulipolar world.

When it opened in 1869 the Suez Canal illustrated the 19th century European colonial projection, in the following century, the Panama Canal coincided with the rise of the American power but one had to wait the Torrijos-Carter Treaties in 1977 to see the formal end of U.S. direct control over the watercourse, in the 21st century, the Kra Canal could be a symbol of the Chinese renaissance and, by the way Thailand and the ASEAN region would immediately benefit from it, it could demonstrate our collective ability to progress.

David Gosset is director of the Academia Sinica Europaea at CEIBS and founder of the Euro-China Forum. He has established the New Silk Road Initiative. Source: huffingtonpost.com