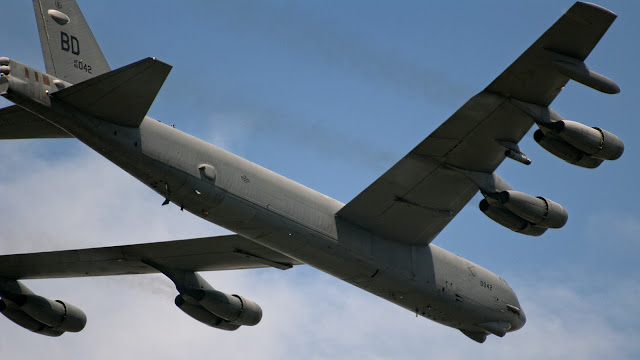 13 March 2018 -- The 1760 Internal Weapons Bay Upgrade, or IWBU, will allow the B-52 to internally carry up to eight of the newest "J-Series" bombs in addition to carrying six on pylons under each wing.

This initiative not only increases the weapons delivery capacity for the bomber but also enables it to accommodate a wider swath of modern weapons. 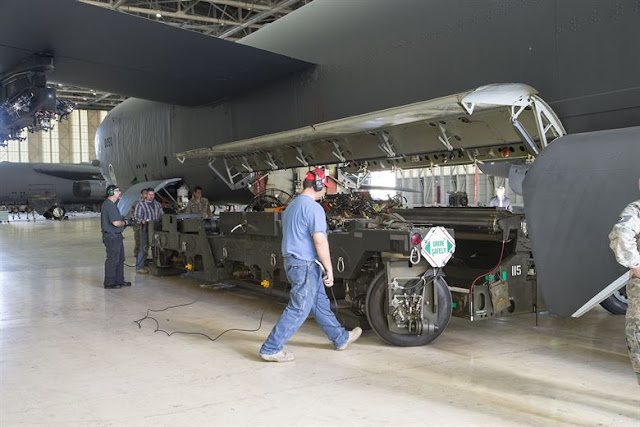 Team members from the 419th Flight Test Squadron, the Global Power Bomber Combined Test Force and Boeing installed a Conventional Rotary Launcher on an Edwards B-52H this past December. The upgrade modifies the internal weapons bay of the B-52H bomber by integrating a CRL that has the capability of carrying Military Standard 1760 “smart weapons. (U.S. Air Force photo by Bobbi Zapka) 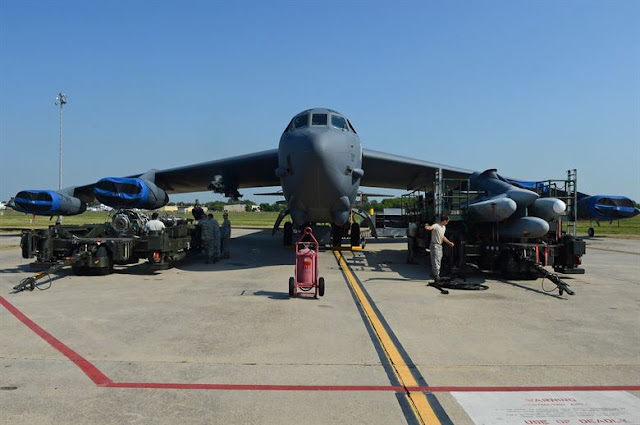 Airmen from the 2nd Maintenance Group weapons standardization prepare to load a strategic rotary launcher and an air launch cruise missile pylon to a B-52H Stratofortress on Barksdale Air Force Base, La., Aug. 20. The 1760 Internal Weapons Bay Upgrade allows the B-52 to carry up to eight J-series weapons inside its bomb bay and 16 on external pylons for a total of 24. Later increments will also add the capability to house Joint Air-to-Surface Standoff Missiles and Miniature Air-Launched Decoys internally as well. (U.S. Air Force photo/Senior Airman Micaiah Anthony)

The JDAM is one of the Air Force’s most advanced precision-guided bombs, using GPS-assisted inertial navigation to deliver up to 2,000 pounds of high explosives with pinpoint accuracy. Currently the B-52 can carry up to 12 J-series weapons on its exterior pylons, but they cannot be carried internally due to a difference in wiring inside the bomb bay.

“JDAMs use a digital architecture in conjunction with a software component called a Stores Management Overlay to communicate with the aircraft,” Kenny said. “The B-52’s pylons have had the capability to speak to the digital systems on precisions weapons like JDAM for years, while the bomb bay remained analog and only capable of dropping unguided conventional weapons. That’s where the IWBU comes in.” 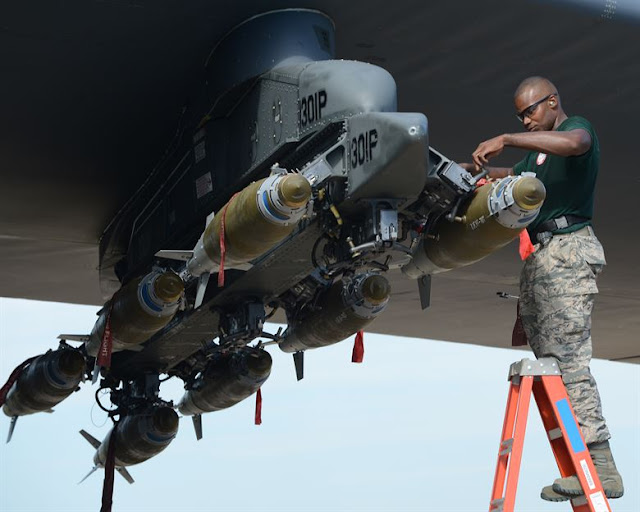 Staff Sgt. Stefano Cothran, 2nd Aircraft Maintenance Squadron weapons load team, secures a GBU-38 to a pylon during the 2014 Global Strike Challenge on Barksdale Air Force Base, La., Aug. 27. Up to eight GBU-38 Joint Direct Attack Munitions can now be carried inside the bomb bay of the B-52H Stratofortress, thanks to the 1760 Internal Weapons Bay Upgrade. The upgrade also increases the number of JDAMs that can be externally carried to 16, for a total payload increase of 100 percent. (U.S. Air Force photo/Senior Airman Benjamin Gonsier)

The first increment of the IWBU rewires the B-52’s internally-carried conventional rotary launcher, allowing it to house and communicate with up to eight J-series weapons. It also reconfigures the external pylons to carry up to 16 of the laser-guided JDAM variant.

“IWBU nearly doubles the number of JDAMs a single plane can carry,” said Kenny. “This gives us the option to reduce the number of aircraft required to execute a mission, lowers our fuel requirements and provides us with more flexible loadouts, enabling us to strike a wider range of target types during any given mission.” 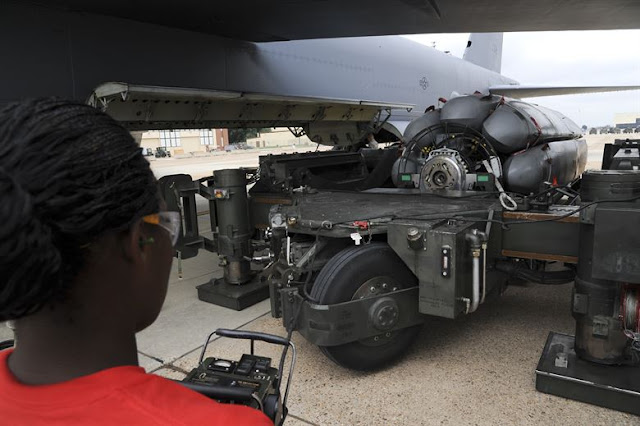 The next increment of the program will allow the B-52 to internally carry eight Joint Air-to-Surface Standoff Missiles, as well as a variety of Miniature Air-Launched Decoys. It will also give the B-52 the option of carrying up to 12 extended-range JASSM-ERs on the external pylons for a total capacity of 20 of these advanced, stealthy cruise missiles. Source: barksdale.af.mil

U.S. Military Technology
Published on Mar 7, 2018
Meet the 'New' B-52 Bomber: How This Old Plane Can Drop Even More Bombs

Related articles:
Up to $11.9B for B-52H Maintenance & Modernization