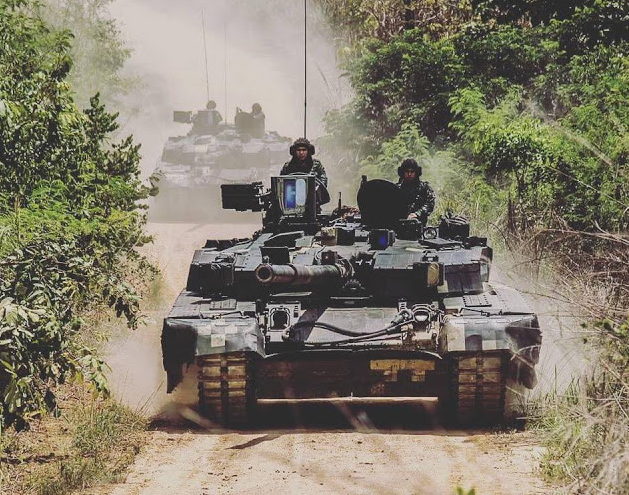 In a March 26 press statement, the concern’s director general, Pavlo Bukin, asserted that a final batch of six modern Ukrainian-made armored vehicles had already been produced and successfully tested in the presence of the ordering party.

The last several tanks will be shipped to Thailand in the near future, the concern’s website quoted Bukin as saying. After the sale is complete, UkrOboronProm plans begin producing Oplots for the Ukrainian Armed Forces.

Ukraine vowed to produce up to 49 new advanced tanks for Thailand as part of a $241 million contract with the Asian nation signed in September 2011. The first batch was shipped to Thailand in early 2014. However, in the ensuing years, production saw repeated delays due to an economic crisis in Ukraine amid Russia’s annexation of Crimea and the subsequent war in Donbas.

By late 2016, UkrOboronProm had managed to produce only 25 vehicles out of 49, according to official figures. In April 2017, the Thai defense ministry reportedly declined to purchase the remaining tanks in favor of the Chinese VT-4 main battle tanks. However, UkrSpetsExport, a subsidiary of UkrOboronProm, asked Thailand to let it finish the Oplot contract in 2017.

In an interview with the Kyiv Post in late February 2018, Pavlo Bukin, the newly-appointed director of UkrOboronProm, asserted that the Oplot contract would be completed by late March or early April 2018.

“The contract was being fulfilled despite unfair competition and Russia’s military aggression,” Bukin also said in a March 26 statement. “We are thankful to our strategic partners from Thailand for their mindful understanding of the problems that Ukraine faced and for their faith in Ukraine’s ability to overcome the artificial obstacles in our relations.”

The Thai contract enabled the Ukrainian budget to receive considerable foreign currency inflows and allowed UkrOboronProm to fully put its enterprises to work, the official said.

Produced at the Kharkiv Armored Plant, the Oplot tanks, which Ukraine’s defense industry presents as one of its points of pride, were designed in 2008 and put into the service of Ukraine’s Armed Forces in 2009.

An in-depth overhaul of the T-84U tank, the Oplot features enhanced crew protection and advanced fire control systems, according to its developers. A default Oplot model operates a 125-millimeter smoothbore KBA-3 cannon with a shooting distance of up to 5,000 meters and an allowance of 46 rounds. A 12.7-millimeter KT anti-aircraft machine gun, a 7.62-millimeter coaxial machine gun, and Ukrainian-produced Kombat anti-tank guided missiles complement these armaments.

The vehicle’s multi-layer armor is bolstered by anti-RPG flank screens, as well as Duplet reactive armor, the Zaslon active protection system, and the Varta optronic system, which is meant to deceive and mislead incoming anti-tank projectiles.

The Oplot’s 1200-horsepower 6TD-2E diesel engine allows an operator to engage the tank by default in any climatic conditions at temperatures of up to +55 degrees Celsius (+131 degrees Fahrenheit), according to designers. The tank also features an onboard fire suppression system and separated escape hatches for each of its three crew members. In combat, the tank can utilize GPS navigation and its computer fire control system, in addition to its highly-protected communication links.

According to the Kharkiv plant, the Oplot is among the world’s most combat-capable and durable battle tanks designed universally for modern warfare. However, as of now, it has never been put to the test in actual combat.

In 2011, the Oplot was initially demonstrated overseas at the IDEX-2011 arms exhibition in Abu Dhabi, United Arab Emirates, where it received mainly positive feedback. However, the tank was criticized for its high price tag (approximately $4.9 million) and its long and complicated production cycle.

Later, the Oplot won a contract for the Thai Royal Army, beating out the Russian T-90 and German Leopard 2 tanks. For Thailand, Ukraine issued a special Oplot-T model that features an air conditioning system fit for tropical climates and modified communications gear.

In late February 2018, the United States was reported to be purchasing one Oplot in order to evaluate Ukrainian military developments. Earlier, in June 2017, another Oplot was reportedly purchased by Pakistan as part of a trial batch prior to a possible contract with UkrOboronProm. However, neither report was ever confirmed at the official level.

As of early 2018, Ukraine’s Armed Forces still had only 10 Oplot tanks at their disposal, but never used them. Instead, the military largely relied on refurbished Soviet T-72 and T-64 tanks and their modifications. Amid the ongoing war in Donbas, foreign Oplot sales have proven controversial in Ukrainian society.

But according to presidential adviser Yuri Biriukov, selling one Oplot tank overseas at a price of roughly $4.9 million would allow Ukraine to overhaul and modernize at least 5 old T-64 tanks for Ukraine’s front line. And the Oplot’s advanced features are not necessary for the type of warfare in the Donbas war zone, he said.

Nevertheless, in a Feb. 23 interview with Radio Svoboda, Chief of General Staff Viktor Muzhenko stated that the Ukrainian Armed Forces expect to receive Oplot tanks for service by the end of 2018.

On March 26, Pavlo Bukin, the Director General of state-owned defense industry group Ukroboronprom, declared that the deal had effectively been completed, with the batch of combat vehicles successfully passing a test in the presence of Thai defense officials the tanks soon be being sent to Thailand to completing the deal. Bukin was blunt about the state of affairs, noting that the contract was fulfilled despite the challenges Ukraine faced, including “Russia’s unfair competition and military aggression,” and thanking Bangkok for its understanding of the obstacles that Kiev had to overcome to realize the deal.


The broader significance of this development beyond the deal itself remains to be seen. The deal’s completion does technically remove an obstacle to Kiev and Bangkok moving forward on opportunities to expand their defense partnership that have been discussed earlier, including on military technology transfer, defense industry, and even the joint venture on a military production facility. But Ukraine is only one of the countries on an increasingly longer list of defense partners for Thailand that also includes Russia and China, and there are various considerations about how Bangkok will choose to proceed here that go beyond the delayed fulfillment of a single deal (See: “What’s Behind the New US-Thailand Military Facility Hype?”). Source: thediplomat.com

THAILAND’S defense technology agency plans to set up a joint center with China to produce and maintain military equipment.

The Thai government’s Defense Technology Institute will set up the country’s first commercial joint defense facility with China in northeast Khon Kaen province in July, a defense ministry spokesman said. It will be responsible for assembly, production and maintenance of Chinese land weapon systems for the Thai army. Rest of article: HERE