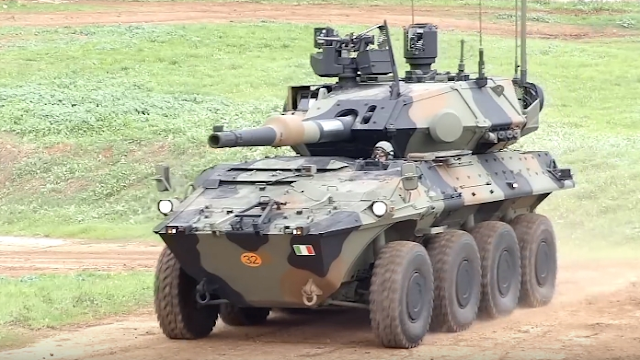 Manufactured by a consortium grouping Italian firms Leonardo and Iveco, the Centauro II is faster, more powerful and better protected than the Centauro tank already in service with the Italian Army, which it will replace.

The new 30-ton Centauro features a 120mm cannon, digital communications and a 720-horsepower engine, and is seen by planners as a lightweight tank able to complement the Freccia armored troop carrier on which the Army is basing its new medium brigades.

The new tank’s enhanced digitalization means it will work better with the digital capabilities of the Freccia, and it provides 24 horsepower per ton compared to 19 for the old Centauro.

Generals see the new Centauro as lighter and more flexible than a traditional tank, but with the same destructive power.

The eight wheels of the new Centauro, which make it better suited for peacekeeping operations than a tracked vehicle, extend farther out from the hull of the vehicle than its predecessor to give it greater stability. The new design also means that any mines triggered by the pressure of the tire will detonate further from the hull.

The Iveco-Oto Melara Consortium, or CIO, was established in 1985 on a 50-50 basis between Iveco and Oto Melara, which is now part of Leonardo.