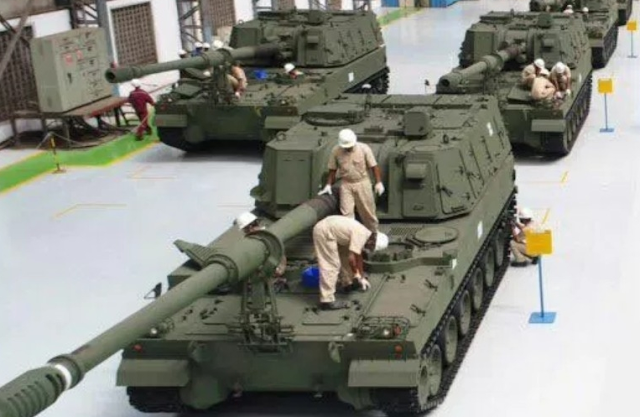 
Army to get artillery guns from September


Import from South Korea to be inducted from September

From September, the Army will be inducting two types of artillery guns into its arsenal. These will be the first induction of heavy artillery since the Swedish Bofors guns imported in the 1980s.

The Army will start taking delivery of the K9 Vajra-T tracked self-propelled artillery guns from South Korea in September and the first regiment of 18 guns is expected to be ready by the third quarter of 2019. At the same time, it will also receive four M777 ultra-light howitzers from the U.S.

“The Army will get 10 guns this year from September. All the 100 guns will be delivered by November 2020,” a defence source said.

In April 2017, the Indian engineering conglomerate Larsen & Toubro (L&T) and Hanwa Techwin of South Korea signed a contract to manufacture the K9 Vajra-T guns. The K9 was shortlisted by the Army after extensive trials and the deal is worth about ₹4,500 crore for 100 guns.

K9 Vajra-T is a 155-mm, 52-calibre self-propelled artillery gun with a maximum range of 40 km, customised from the original K9 Thunder gun. The fire control system has been customised for desert conditions to the requirements of the Army.

90 to be readied in India

The first 10 guns will be imported from South Korea and the rest manufactured by L&T in India.

The M777 induction process is progressing on schedule after a brief delay. The Army will shortly resume user trials after which it will take formal delivery. “We will get four guns this year from September,” the source said.

In November 2016, India signed a deal for 145 M777 ULHs with the U.S. under the Foreign Military Sales programme at a cost of $737 million. The M777 is a 155-mm, 39-calibre towed artillery gun and weighs just four tonnes, making it transportable under slung from helicopters.

Related articles:
Indian Army to get 5 M777 howitzers made by BAE Systems in September
Army's howitzer damaged during firing in Pokhran; faulty Indian ammunition may be the cause
Indian Army is set to receive M777 ultra-lightweight Howitzers by June
Govt clears deal to buy 145 artillery guns from BAE Systems – India