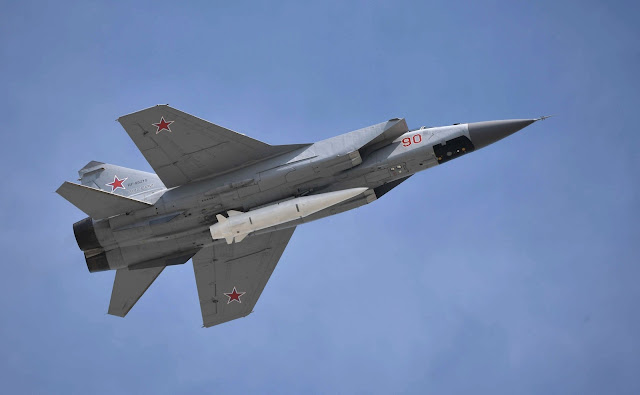 
The candidate for writing off took up the "Dagger"

Russian combat aviation is extremely diverse. Here you and front fighters from different design bureaus, and multi-purpose - from the fourth generation to almost the fifth, and actually the fifth: Su-57, which is about to start coming into the troops, and, of course, the fighter-bomber, and even such exotics , as interceptors.

Against the backdrop of the laconic composition of the US Air Force, all this diversity of generations, destinations, developers, looks like an Asian horde. Judge for yourself, the same Yankees are armed with weapons: a fighter of conquest of superiority in the air of the former, departing, and new, succeeding generation; Multifunctional fighter of the fourth and the same supposedly fifth generation; and even the old man "Strike Eagle" (fighter-bomber).

We can look for strengths in our air force structure as many as we like, but we can not but agree that its nature is spontaneous and dictated by, first of all, the processes that took place in the country during the last quarter of a century. At the same time, the military command does not abandon attempts to make this structure slimmer, but so far it has not turned out, especially with our traditional reluctance to use such a tool as the writing-off of old equipment. Take the same interceptors MiG-31 - we have them more than any other combat aircraft, while they are functionally rather limited.

The MiG-31 does not know much, but what it does, does the best. Above, faster, further - perhaps, its motto. Practical range with armament and suspension tanks - up to 3 000 km, speed at high altitude - 3400 km / h, so no one else knows how. Actually, the working height is over 20 km, up to an absolute record of 37 km. And the plane is quite solid for its class: the maximum take-off weight is 46 tons, 8 tons more than the fairly large F-22, and 16 tons than the F-35.

Mig-31 has a number of features of flight characteristics that make it a fighter with uncommon abilities. For example, supersonic without forcing, in a horizontal flight and even with a climb. Or the high range of target detection of the on-board radar "Zaslon", especially its modernized version - from 320 km, and the defeat - from 280 km. Such results are not available to any other fighter. These features make the MiG-31 an excellent interceptor, it is able to catch up and overtake the cruise missile and lower the satellite from a low Earth orbit.

In addition to air-to-air missiles, in principle, it can also take on board airborne weapons, such as bombs, anti-radar and even anti-ship missiles.

But this, in fact, is all that MiG-31 can. He does not possess high maneuverability, which means that it is better for him not to approach enemy fighters. The abilities of invisibility are also absent. The carrying capacity of 5 tons with a full tank is clearly not impressive. The assortment of weapons used on the surface is very meager.

In general, it is not at all multifunctional, like the current aircraft, and is hardly suitable for combat with modern fighters. Those goals for which it was created in the 70's MiG-31 for the most part went to waste, along with the Blackbird SR-71 and reconnaissance balloons. Therefore, since we no longer wait for the armored missile carriers over the Arctic, then why do we need this unique but highly specialized aircraft?

Such questions were asked more than once, especially at the beginning of the zero ones. They offered MiG-31 to write off or reduce the size of its fleet.

Americans with their interceptor F-14 "Tomcat" and did - written off completely.

Hypersonic missile X-47M2 "Dagger", launched over St. Petersburg, is capable in nine and a half minutes to send to the bottom of the destroyer, the air defense of which, at best, will have time to understand where the threat was coming from.

"Dagger" - not a cruise missile, it keeps in the air at the expense of its speed. And for its development, it needs to rise beyond the dense layers of the atmosphere.

This requires a carrier aircraft, fast, capable of easily climbing to the stratosphere and, preferably, having a good flight range to maximize the missile application area.

This mission can be performed by many aircraft, from missile carriers to multifunctional fighters, and the same Su-57 will later take care of this, but the MiG-31, which has unique and very necessary qualities, is best for this.

Together they are a deadly tandem, in which the weaknesses of each are leveled.


In this story, first of all, it is worth paying attention to how the Ministry of Defense squeezes the maximum out of the arms from the USSR

Obviously, not all of them will be upgraded from the hundreds of MiG-31 to the Dagger carrier. And also only a few dozen MiGs will gain new opportunities in modifying the BM. The rest will eventually be withdrawn from the Air Force, especially since it seems that the MiG-41 is already under development. But in this story, first of all, it is worth paying attention to how the Ministry of Defense squeezes the maximum out of the arms from the USSR, combining it with new developments and endowing a product of almost half a century ago with the opportunity to again serve the country and fight the enemy at a new level of efficiency.

Perhaps, this feature - squeezing the maximum out of existing, rather limited budgets, opportunities and equipment, will still be written in textbooks. Russia here is advantageously different not only against the background of the CIS countries and the former Warsaw Pact, which are mostly able only to be operated with varying degrees of effectiveness by the Soviet armadas, but also in comparison with potential adversaries, breaking records in the cost of development.