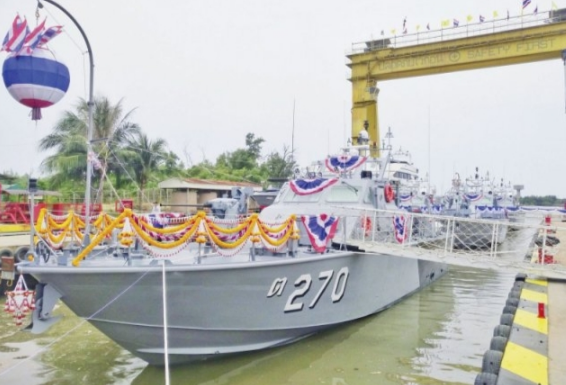 The vessels, which bear pennant numbers from 270 through to 274 respectively, were launched on 24 July at Marsun’s facilities in the country’s Samut Prakan province, said the RTN in an announcement the following day.

The service is now anticipating the delivery of 10 M21 patrol vessels. An earlier batch of five boats in the class was launched by Marsun in February 2018.

The vessel has carrying capacity for up to 4,000 litres of fuel, 1,200 litres of water, and can accommodate a crew of nine. It can operate up to Sea State 2.

Images of the launch ceremony released by the RTN confirm that each of the five vessels launched on 24 July have been equipped with a 20 mm cannon in the primary position. The class is also armed with one 12.7 mm machine gun with a co-axial 81 mm grenade launcher in the aft section.

The M21 class has also been equipped with one crane-launched rigid hull inflatable boat (RHIB) at stern, and one inflatable life raft canister on the port side at aft.

Once delivered, all five vessels are expected to be deployed with the RTN’s coastguard squadron and take on duties such as VIP escorts, fishery resources protection, and other maritime constabulary duties in the Andaman Sea and the Gulf of Thailand.

Boats built by Marsun for The Royal Thai Navy: Details
Posted by Nawapon at 08:55