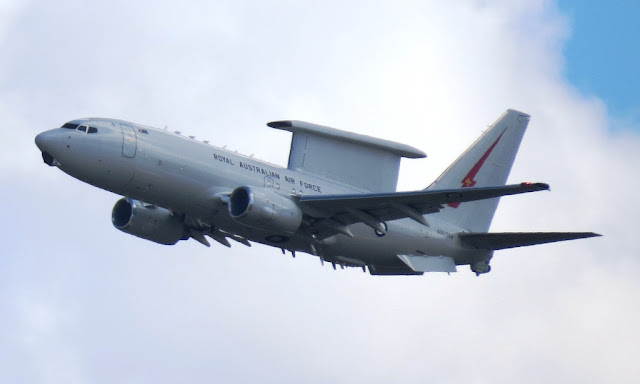 
Airbus and Saab consider challenge to Boeing Wedgetail for UK


By: Andrew Chuter  and Beth Stevenson

LONDON -- Two of Europe’s top aerospace defense companies are discussing combining their airborne early warning capabilities in an attempt to head off a possible sole-source British purchase of the Boeing Wedgetail.

The talks are centered on a potential collaboration bringing together an Airbus-built platform with a version of Saab’s Erieye radar, said two sources familiar with the discussions.

But a third source though sought to dampen expectations of a deal saying the talks were not exclusive and both companies were also talking to various other potential partners.

The British are considering replacing their venerable, and increasingly unreliable, Boeing Sentry E-3D fleet with a new airborne early warning aircraft for the Royal Air Force.

The Sentry’s are currently due to stay in service with the RAF until 2035, subject to a capability sustainment program to extend their service life.

News that the two companies are discussing a potential tie-up comes just three days after UK Parliamentary defence committee chairman Julian Lewis wrote an open letter to British defense procurement minister Guto Bebb urging the MoD to ensure that any tender for a new surveillance aircraft must be open to fair competition, and not awarded sole-source to the Wedgetail.

The letter said that it would be “particularly inappropriate for a competition to be foregone in favour of Boeing following their involvement in the imposition of punitive tariffs against Bombardier last year [over regional jet subsidies].”

Airbus didn’t confirm that talks were taking place with Saab. But in a statement, it unsurprisingly supported the calls for an open competition -- and gave a clue as to what it sees as potential platforms for a possible British requirement.

“As the biggest supplier of large aircraft to the Royal Air Force, Airbus would welcome a competition to present a market leading and cost-effective solution for the RAF’s future AWACS requirements,” said an Airbus spokesman.

“Building on our successful experience in converting commercial aircraft into the world’s market-leading tanker, Airbus is working on further opportunities to use the A330 and A320 as the basis for new mission aircraft,” said the spokesman.

To the same effect, Saab also welcomed an open competition from the government to replace the Sentry fleet, although it did not go into specifics regarding the exact offering it would expect to pitch should a competition be held.

“Saab, as the one of the world’s leading suppliers of airborne surveillance and air battle management systems, would enthusiastically pursue an open competition to replace the UK’s aging E-3D fleet, should the UK MoD choose to issue a requirement,” a company spokesman said.

Late last month, The Times newspaper reported the MoD was heading for a possible sole source buy of between four and six Wedgetail aircraft at a cost of up to £3 billion to replace the Sentry fleet.

The NATO summit in Brussels, the Royal International Air Tattoo, or the Farnborough air show later this month, have been touted as possible venues for an announcement.

The MoD declined to comment on whether a Wedgetail deal was likely or imminent.

‘Any decision on the way forward for the Sentry capability will be taken in the best interests of national security in the face of intensifying threats, and only after full consideration. We tender contracts competitively wherever appropriate. It is too early to comment further at this time,’ said an MoD spokesman.

An Australian air force Wedgetail is scheduled to appear at the RIAT show starting July 13 at Fairford, southern England. The 737-based jet has also been sold to Turkey and South Korea.

The letter raised the committee’s concerns over the state of the RAF’s Sentry fleet, saying it was in a poor state of maintenance and often only a single aircraft in the six strong fleet was available at any one time.

A statement accompanying the letter said reports have emerged that as part of the Modernising Defence Programme review being conducted by the MoD it is considering cancelling the sustainment program and replacing the Sentry fleet with a new aircraft.

The letter from the lawmakers reflects increasing concern on the committee about the award of non-competitive contracts with overseas companies for major defense equipment requirements.

The most recent of those was the MoD decision to buy Artec-built Boxer mechanized infantry vehicles from Germany without a competition, but the U.S. industry has also benefited from several sole-source deals in recent times.

Boeing has particularly rankled competitors after winning two major UK contracts in 2016 without a competition: the P-8 Poseidon maritime patrol aircraft and the AH-64E Apache attack rotorcraft, the selection of which were announced at that year’s Farnborough air show.

Lewis said in the letter that the committee had “in the light of convincing evidence of at least one credible alternative to Wedgetail,” it can see “absolutely no reason why, yet again, to dispense with open competition.”

It’s not known exactly who the committee is referring to, but an Airbus/Saab combination would appear to qualify as being highly credible.

Saab’s well regarded Erieye radar has sold widely around the world on turboprop and regional jet platforms with countries like Brazil, Saudi Arabia, Greece and Sweden operating the capability.

Most recently it secured a deal with the United Arab Emirates for the delivery of five of the new GlobalEye early warning and control aircraft which uses the Bombardier 6000 business jet as a platform and boasts a new extended range version of Erieye.

Saab executives at the roll-out of the GlobalEye in February said they had briefed the British on the aircraft’s capabilities, but their view was the RAF still wanted a larger cabin than a business jet could provide.

One option to meet that requirement is the possible use of almost new A330 tanker aircraft available under the AirTanker private finance initiative arrangement to provide inflight refuelling capacity to the RAF.

Fourteen A330s were built for AirTanker, in which Airbus is a shareholder, with nine aircraft being available constantly for the RAF and the remainder of the airframes leased out to other users, but available for immediate return to air refueling duties in a crisis.

The wings of Airbus’ commercial airliners are manufactured in the UK, and uncertainty surrounding the terms of the nation’s impending exit from the European Union has caused the company to issue a strong warning to the government that it may move the work elsewhere if Brexit does not favor movement of parts, or the certification of the wings in line with European standards.

CEO Tom Enders has been vocal on his views regarding the situation, but opening up other areas of work in which companies like Airbus may participate - such as an open competition for the AWACS replacement – could help companies like Airbus who feel the government has overlooked their interests in the UK.

Other executive though wonder whether Brexit supporting Government ministers in Britain are in any mood to do Airbus any favors in sectors like defense procurement.