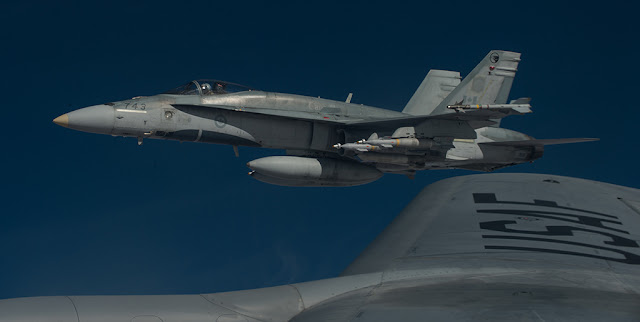 As Canada formulates requirements for a future fighter to replace Boeing CF-18 Hornets, the government is now asking six potential bidders for information about their capabilities to maintain the new fleet.

A letter of interest sent to bidders on 23 July broadens the Canadian government’s year-long series of engagements with industry suppliers.

The letter asks the six potential bidders to provide feedback on how the government plans to divide the sustainment responsibilities between industry and the Department of National Defence.

“Please indicate any barriers or challenges that you would need to address to allow you to undertake this work for a future fighter fleet,” the letter states.

All six potential bidders signed on to the official Supplier’s List in February. Their presence on the list allows the suppliers to continue engaging with the Canadian government about the acquisition, but does not commit them to submit a bid.

A Conservative Canadian government selected the F-35 in 2009, but that plan was scrapped after the Liberal party ascended to power in Ottawa in 2015.

Prime minister Justin Trudeau’s government initially selected the F/A-18E/F for an interim contract for 24 aircraft, while it continued to evaluate options on a permanent CF-18 replacement. But Trudeau cancelled a plan to sign the interim contract last summer after Boeing filed a trade complaint against Bombardier with the US Department of Commerce.