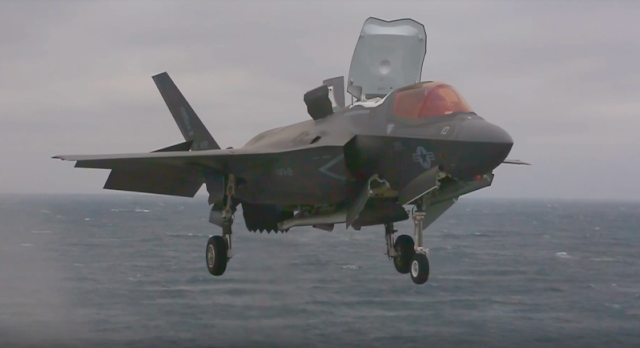 The aircraft embarked on the Wasp in advance of the 31st MEU’s upcoming Spring Patrol 2018, a regularly-scheduled patrol of the Indo-Pacific region with the ships of Amphibious Squadron 11, forming the Wasp Amphibious Ready Group.

“This is a historic deployment,” said Col. Tye R. Wallace, 31st MEU Commanding Officer. “The F-35B is the most capable aircraft ever to support a Marine rifleman on the ground. It brings a range of new capabilities to the MEU that make us a more lethal and effective Marine Air-Ground Task Force.”

Well-suited for the Marine Corps’ amphibious and expeditionary focus, the F-35B can carry more firepower into more uncertain environments for longer periods of time, with better survivability than any other aircraft in history.

The “B” variant of the F-35 is the only one capable of short take-off and vertical landing. The STOVL capability allows the F-35B to launch from and land on amphibious assault ships like the Wasp, greatly increasing the F-35B’s range and deployability.

“The F-35B is a game-changer for the Marine Corps,” said LtCol. Richard Rusnok, VMFA-121 Commanding Officer. “We are honored to be the first to deploy such a capable aircraft in support of a MEU, and are looking forward to integrating will all the other elements of the Marine Air-Ground Task Force and Navy Amphibious forces during this and future deployments.”

The F-35B combines a variety of specialized capabilities in one aircraft, such as stealth, electronic attack, advanced sensors technology and high payload capacity, all while maintaining the agility that fighters are known for. The resulting flexibility allows a lone F-35B to accomplish missions that would otherwise require multiple aircraft.

With advances in sensors and networking technology, the F-35B is able to share a superior picture of the battlefield with other pilots flying different platforms like the F/A-18 Hornet or AV-8B Harrier. The result is a force-multiplying effect for the Marine Corps’ existing fleet of aircraft that illuminates the battlefield for all friendly pilots in the sky.

“It’s an unbelievable aircraft,” said Maj. Michael Wyrsch, F-35B pilot and VMFA-121’s Detachment Executive Officer. “We have seen first-hand in multiple exercises and training events where the F-35 has brought an entirely new level of capability and lethality to the Marines on the ground as well as the overall air fight.” 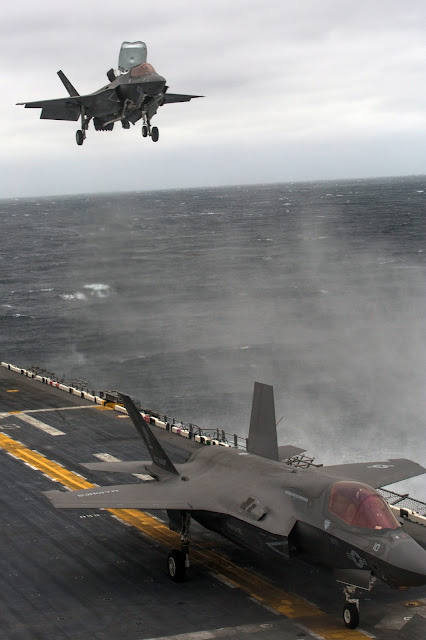 EAST CHINA SEA - An F-35B Lightning II with Marine Fighter Attack Squadron (VMFA) 121 touches down on the amphibious assault ship USS Wasp (LHD 1) as a second F-35B makes its approach, marking the first time the aircraft has deployed aboard a U.S. Navy ship and with a Marine Expeditionary Unit in the Indo-Asian-Pacific region. VFMFA-121, assigned under the Okinawa-based 31st Marine Expeditionary Unit, will remain embarked aboard Wasp for a regional patrol meant to strengthen regional alliances, provide rapid-response capability, and advance the Up-Gunned ESG concept. .  (Photo by Cpl. Bernadette Wildes)
Posted by Nawapon at 19:08