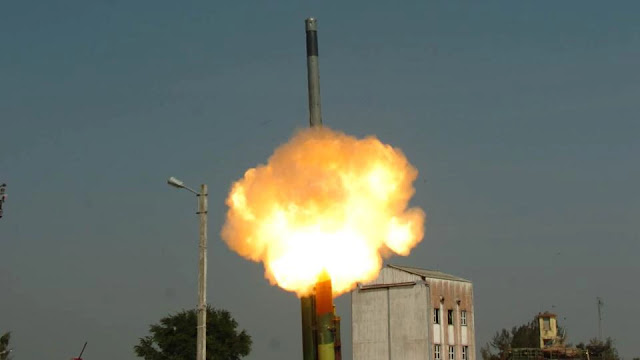 File photo of a BrahMos missile being test-fired. - hindustantimes.com


India on Monday successfully test fired BrahMos supersonic cruise missile from test range along Odisha coast. The information was confirmed by officials of the Defence Research and Development Organisation.

India on Monday successfully test fired BrahMos supersonic cruise missile from test range along Odisha coast. The information was confirmed by officials of the Defence Research and Development Organisation.

The missile was test-fired from a mobile launcher stationed at Launch pad 3 of the Integrated Test Range (ITR) at Chandipur near here at 10.40 am, Defence Research and Development Organisation (DRDO) officials said.

The trial was conducted to validate its "life extension" technologies developed for the first time in India by DRDO and team BraHmos, said an official of the ITR.

Defence Minister Nirmala Sitharaman congratualated DRDO scientists and team BrahMos for the successful launch of BraHmos missile with new technology on Monday. "Smt @nsitharaman congratulates Team Brahmos & @DRDO_India for successful flight test carried out at 1040 hrs on 21 May 2018 from ITR, Balasore to validate BRAHMOS missile life extension technologies developed for the first time in India," her office said in a twitter post.

The successful test will result in huge savings of replacement cost of missiles held in the inventory of the Indian Armed Forces, it said.

The two-stage missile - first being solid and the second one, a ramjet liquid propellant - has already been introduced in the Army and Navy, while the Air Force version had witnessed successful trial, the DRDO scientists said.

BrahMos variants can be launched from land, air, sea and under water. India successfully launched the world's fastest supersonic cruise missile from a Sukhoi-30 MKI combat jet for the first time against a target in the Bay of Bengal in November, 2017, they said.

In March, the supersonic cruise missile was test fired from Pokharan test range in Rajasthan.

According to a report, BrahMos, the fastest cruise missile in the world co-developed by India and Russia, will be breaching the mach 7 barrier to become a 'hypersonic' system in the next decade.

"We will require seven to ten years from now to become a hypersonic missile system," Sudhir Mishra, the chief executive and managing director of the joint venture company BrahMos Aerospace had told PTI in April.

He had said the missile, which currently travels at mach 2.8 or 2.8 times the speed of sound, would touch mach 3.5 soon and mach 5 in three years.

The intent is to come out with a missile that will be able to deliver to the next-generation warfare, Mishra said.