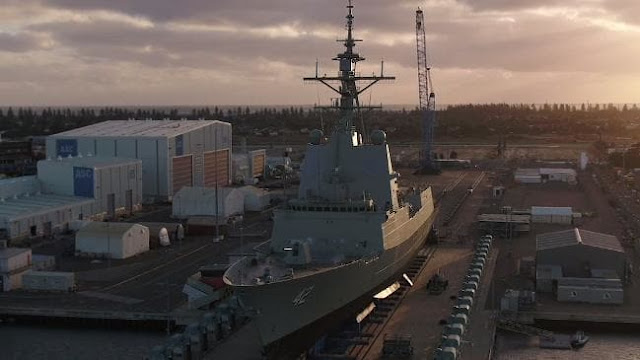 
The third and final air warfare destroyer has been launched in Adelaide, completing a program that delivers the navy its most potent warships.

Speaking at the launch of the Sydney, Mr Pyne said in Adelaide the new ship was the most modern of its type.

"An air warfare destroyer protects the northern approaches to Australia. It has a significant capability in terms of sonar, radar, missiles and self defence," he said on Saturday.

"And it will continue to evolve."

The Sydney will now undergo final fit out before beginning sea trials. It is expected to go into full service with the navy in late-2019.

Like its sister ships, the HMAS Hobart and the Brisbane, the Sydney is 146 metres long with a range of about 5000 nautical miles, or about 9000 kilometres, and a top speed of more than 28 knots.

It will have a crew of 186 and is powered by a combination of gas and diesel turbines driving twin propellers.

The destroyers are armed with harpoon missile systems and have missile decoy technology.

They are also fitted with a flight deck and hangar for one helicopter.

The HMAS Hobart was launched in Adelaide in 2015 and commissioned in September last year.

The Brisbane was launched in 2016 and is expected to be commissioned later this year.

The launch of the Sydney comes as shipbuilding jobs continue to be shed in Adelaide with the wind down of the $9 billion destroyer program.

The program was plagued with problems in its early years, with delays and cost blowouts but was recently removed from the defence department's projects-of-concern list.

The federal government has moved to bolster the defence shipbuilding sector in South Australia with a decision to produce some offshore patrol boats at Osborne, along with the navy's next fleet of frigates and future submarines, providing for decades of continuous work supporting thousands of jobs.

"Together, the AWD Alliance has worked to transform a brownfield site into a functioning shipyard that has continued to improve processes, skills and efficiency," Mr Evans said.