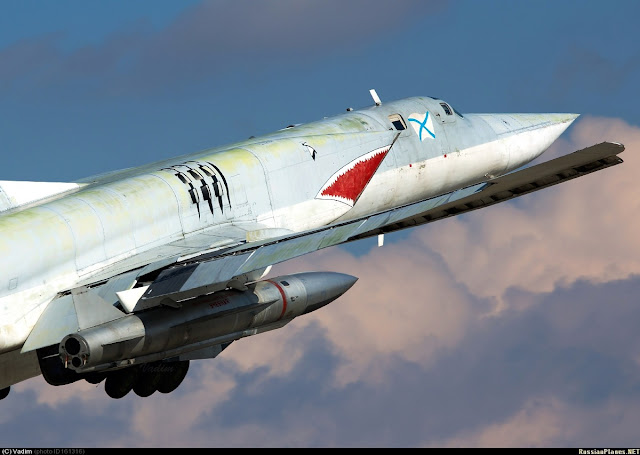 
The Russian Defense Ministry decided to make Kh-22 missiles operational again. They have been the main weapon for supersonic Tu-22M3 bombers for a long time, but were decommissioned in early 2000s. It has been now decided to accept the remaining missiles back into service. Experts said an upgrade will match them with the latest Kh-32 cruise missiles which are considered invulnerable for air defense and fighter jets, the Izvestia daily writes.......Continue reading: HERE

The mighty Kh-22 (AS-4 Kitchen) was the weapon which stimulated the development of the SPY-1 Aegis system. Designed during the 1960s for dual role use as a nuclear armed standoff weapon, and as an anti-shipping missile with either radar or anti-radiation seekers, the Kh-22 remains in service as the primary armament of the RuAF's residual fleet of Tu-22M3 Backfires. While the Tu-95K-22 Bear G was equipped to carry up to three Kh-22s, its progressive retirement has limited use to the Backfire.

Soviet Long Range Aviation (DA-VVS) followed a very different path to the V-MF in pursuing second generation cruise missiles. The Kangaroo proved to be troublesome and clearly would have difficulty penetrating NATO defences, the DA-VVS coveted a missile similar to the British Avro Blue Steel which was being developed for the V-bombers.

Raduga developed the Kh-22 Burya or AS-4 Kitchen to meet this need. The Kitchen was a bigger, faster and longer ranging equivalent to the Blue Steel, initially armed with a 1 Megatonne nuclear warhead and equipped with inertial guidance. The AV-MF instantly took an interest in the Kh-22 and ASCM variants with active radar and anti-radiation seekers eventually emerged.

The Kh-22 is a formidable weapon. Powered by an Isayev R-201-300 / S5.44 liquid rocket delivering 83 kN full thrust and 5.9 kN cruise thrust, it is claimed to exceed 4.6 Mach in cruise at 80,000 ft AGL. Around 3 tonnes of TG02 fuel and AK-20K oxidiser are carried providing a cited range between 145 NMI (270 km) and 300 NMI (550 km), subject to variant, profile and launch speed/altitude. The engine uses gas generator driven turbopumps and a central power generator to power the onboard avionics and hydraulics.

The structure was the first to use OT-4-1 and SM-5 titanium alloys  extensively. Not unlike Lockheed with the A-11/YF-12A, Raduga experienced numerous problems with materials and the high airframe temperature during Mach 3+ cruise.

While the Kh-22 was intended to replace the Kangaroo, it was first deployed in the Tu-22 Blinder which used the PN or Down Beat acquisition radar to target the missile.

By the early 1970s the ineffective Blinder was being replaced by the more capable Tu-22M2 Backfire B, capable of carrying up to three Kh-22s, but usually armed with one on the centerline BD-45 adaptor. The final 1980s Tu-22M3 Backfire C variant had the performance to carry three Kh-22s to 2,500 nautical miles, with underwing rounds on BD-45K adaptors – this weapon system remains in Russian service today. It also armed the primary strike regiments of the AV-MF during the last decade of the Cold War.

The basic Kh-22PG anti-shipping variant of the missile used a PG active radar seeker, the improved Kh-22N the PMG seeker.  The Kh-22P anti-radiation variant, with a PSN or PGP-K seeker, required the Kurs N/NM RHAW receiver. The Kh-22M introduced an improved variant of the engine.

The integration of the Kh-22 on the Tu-95K-20 Bear C proved to be protracted and troublesome, but eventually resulted in upgrades running through the 1980s to convert all Bear B/C bombers into the Tu-22K-22 Bear G equipped to carry the improved PNA Down Beat radar and up to three Kh-22s, for use as a nuclear armed defence suppression or maritime strike system.

Seven variants have been reported to date, and a mid life upgrade for the APK-22 guidance package has also been recently reported. Nuclear armed variants included a TERCOM system to supplement the inertial unit.

If China ever proceeds with the much speculated upon Backfire purchase, the Kh-22 is likely to be supplied as the basic weapon for the aircraft. The Backfire carries up to three rounds, although typical payloads are one or two, on BD-45K/F adaptors. 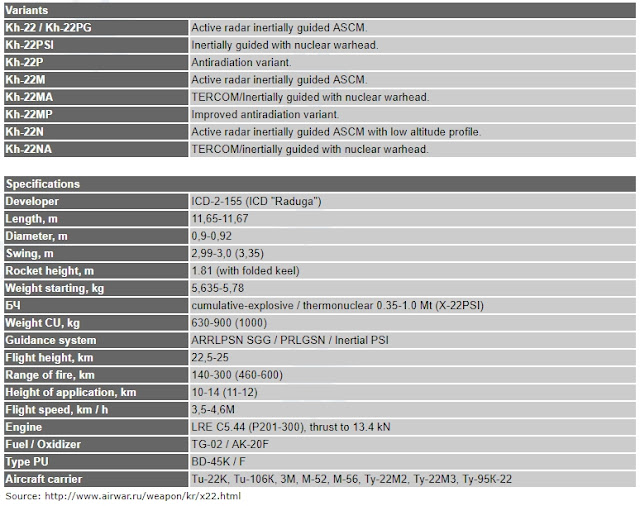 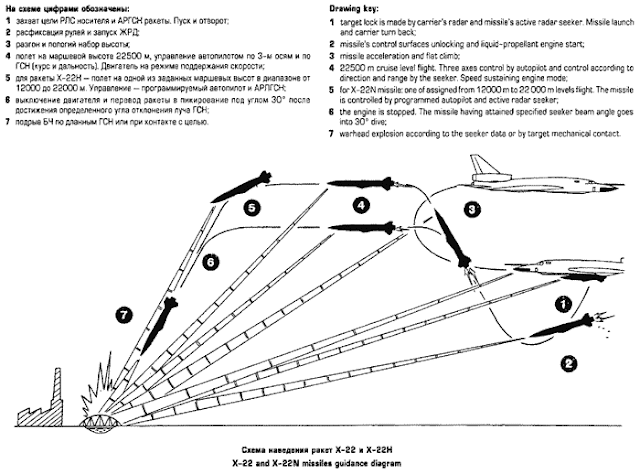 Source: ausairpower.net
Posted by Nawapon at 06:24