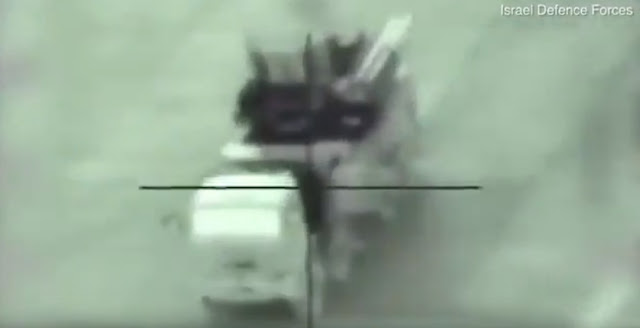 “On May 9, 2018, the Quds force, a special force wing of the Iranian Revolutionary Guard, stationed in Syria, shot 20 rockets towards IDF posts in the Golan Heights. The IDF intercepted four of the rockets, preventing casualties and damage. This is the first time that Iranian forces have directly fired at Israeli troops.

In response, in the night on May 10, IDF fighter jets (mainly F-16I Sufa aircraft according to most sources even though the official IAF website’s release on the attack shows also a file photo of an F-15I) struck several military targets in Syria that belonged to Iran’s Quds force. “The IDF’s wide-scale attack included Iranian intelligence sites, the Quds force logistics headquarters, an Iranian military compound in Syria, observation and military posts, et cetera. In spite of a warning from Israel, Syrian aerial defense forces fired towards the IAF aircraft as they conducted the strikes. In response, the IAF targeted several aerial interception systems (SA5, SA2, SA22, SA17) which belong to the Syrian Armed Forces. All of the IDF’s fighter jets returned to their bases safely.”.......Continue reading: HERE

It is believed to be hit by Delilah cruise missile 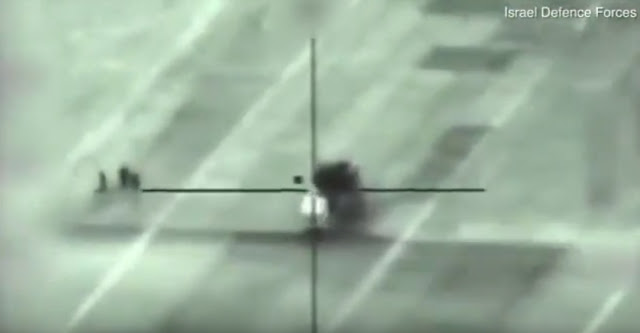 Bump in the back: why "Tubercle" was taken by surprise

The press service of the IDF has published a video from the Spike NLOS rocket, which captures the moment of a strike on a combat vehicle of the "Pantsir-C1" air defense system in  Syria . In war, all means are good, which lead to success in the battle, but even on this video it is noticeable that "Pantsir" was not alerted to combat shooting. In other words, the Israelis hit the SAM not in the course of conducting an anti-aircraft battle, but in fact fired the "Shell" in the back.

We must immediately make a reservation, while very little information to make any reliable estimates and conclusions from the results of this attack.

Judging by the video of the IDF, "Pantsir" was not at the time of the impact on the engineered position and was not even somehow, even in the most elementary way, disguised.

This indicates that the ZRK combat vehicle was absolutely unprepared for combat operations. Moreover, the complex was in a collapsed state.

And where "Pantsir" was located on the terrain at that time - is also absolutely unclear. Whether it was a street (or freeway) with a pedestrian crossing in the background, or the end of the runway. And if it is a runway, then again the SAM was too close to its edge.

Specialists immediately noticed that the complex was not turned on and was not ready for fire. This is clearly visible even in Israeli video. The missiles and cannons of the complex are not even deployed in the direction of the possible direction of the firing. It can be assumed that "Pantsir" was making a march and made a stop just before the missile strike of Israel.

Calculation of the SAM (and this is just three people) at the time of the Israeli missile hit was on the street. That serviceman of the Syrian army, who ran to the combat vehicle, it is quite possible that he received a command (for the continuation of the march, for the inclusion of the complex and bringing into combat readiness, finally, was summoned by the superior commander to the means of communication). Most likely, he, like the rest of the combat crew, did not see the Israeli missile. Otherwise, the fighter would most likely not have run to the combat vehicle.

During the conduct of hostilities there are no honest and dishonest methods of striking. The times of knightly confrontation, when battles were fought in accordance with the code of honor, long over. All is well, which leads to defeat of the enemy. But, by and large, the Israeli blow is a blow in secret.

And to say in this case that the SAM "Pantsir" did not justify the hopes placed on it, is extremely premature and unjustified. It is more correct to say that the Syrian calculation (and mainly its commanders) missed the blow of the enemy.

Could "Shell C1" fire and hit the Spike NLOS missile? Recall, Spike can be installed on air, sea, or land vehicles. In particular, these rockets are completed with a self-propelled artillery installation of the new generation "Pare". However, it is not a fact that our "Pantsir" was struck by this type of automatic control system.

The weight of Spike NLOS in the packaging container is 71 kg, the length is more than 1.5 m. The rocket has an average flight speed of 130-180 m / s. There is no precise data on the effective scattering surface of Spike NLOS, but there is reason to assume that it is comparable to 0.03 square meters. m.

That is, as an objective, it is within the capabilities of the "Shell". The complex can hit it with missiles and cannon fire.

With their missiles "Shell" can knock down the target with a smaller reflecting surface, about 0.01 square meters. m and moving at a speed of 1200 m / s. In this case, even a very high preparation of the calculation is not even required. With this task will cope with the specialists of the average level of training.

As for the possibility of hitting the Spike NLOS with the fire of the "Shell" using a video channel, this task is also possible. But in this case, a very high level of training is required. It must be first-class shooters.

Thus, the rumors that the Israeli Spike NLOS is outside the TTX "Shell", has no basis.

There are also questions about the organization of anti-aircraft missile defense by the Syrian military in this region as a whole. They never fight on their own. They act as part of a unit, unit, group.

If the "Pantsir", which was attacked, performed a march, then it must be covered from attacks by the air enemy by other complexes and systems interacting with it, fighter aircraft, rapid-fire small-caliber antiaircraft artillery, and EW assets. This was done, apparently, was not. That is, there was no elementary interaction between the Syrian forces and air defense systems as such. Only such a conclusion can be drawn from the results of the blow on the lone "Shell".

In such a case, no, even the most advanced anti-aircraft missile systems will not help. Neither "Pantsiri" nor "Triumphs", nor "Torahs" should be perceived as certain sword-swords, capable of sweeping any opponent in different directions. These systems are just an element of a properly organized and built-up air defense system, and the personnel must be highly trained.

Finally, there are simply no "non-killable" SAMs and SAMs. Each of them has both advantages and disadvantages. And the tragedy of the loss of a single combat vehicle (as well as to question its high combat qualities) should still not be done. The case of this Syrian "Shell" can not serve as a basis for discrediting the complex as a whole. Source: news.rambler.ru