Could this be the new US Navy frigate design? 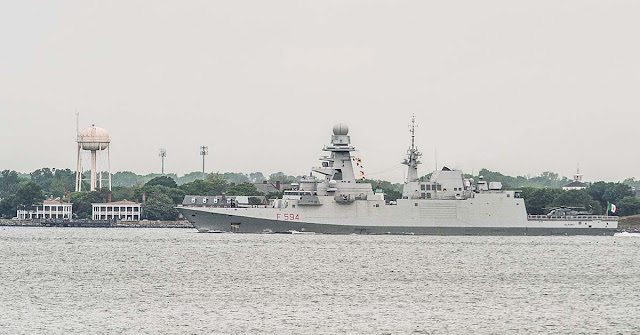 The Italian frigate Alpino passes Fortress Monroe in Hampton, Virginia, on May 18. Alpino pulled into Norfolk after participating in exercises with U.S. ships. (Mark D. Faram/Staff)


NORFOLK, Va. — The Italian navy frigate Alpino visited Norfolk this week after participating in exercises with U.S. ships while at sea.

But its mission goes deeper than that, as the Italian Defense Ministry also says it’s here to hopefully interest U.S. officials in the ship’s design and capabilities as the U.S. Navy investigates future frigate designs.

Commissioned in September 2016, the ship is an anti-submarine variant of the European multi-purpose frigate and is built by the Italian shipbuilder Fincantieri.

Variations of the design are already in use by the French, Egyptian and Royal Moroccan navies.

“This overseas campaign, along with the joint activities and exchange with friendly and allied navies, provides a valuable training opportunity to maintain high levels of cooperation and to strengthen relations with trans-regional allies,” an Italian navy press release said..

But according to the release, the Italian shipbuilder Fincantieri is the “sole sponsor and partner of this campaign.” So while the ship is here to train its crew and operate in exercises, it’s also being used as a marketing campaign.........Continue reading: HERE