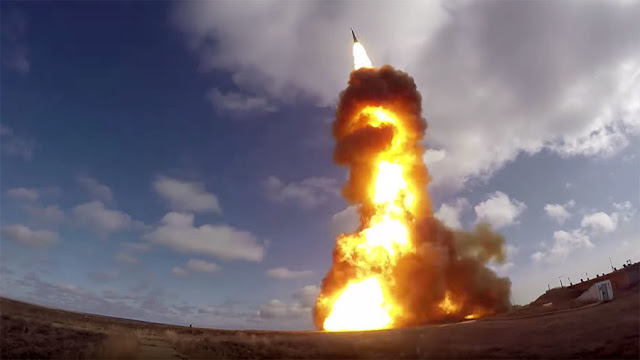 
See below for missile details

Footage from the Russian Defense Ministry released on Sunday shows the Sary Shagan test range in Kazakhstan, where Russia usually tests its anti-ballistic missiles. The missile is seen soaring into the sky toward a target, leaving a plume of smoke in its path.

“A new upgraded anti-ballistic missile has successfully accomplished its task and struck a conventional target at the designated time,” Major General Andrey Prikhodko of the Russian Air Force said.

The ministry would not release any further details, including the exact type of the missile which was tested at Sary Shagan. The projectile is a component of the A-135 anti-missile shield designed to protect the Russian capital against nuclear strikes. It is comprised of dozens of interceptor missiles and sophisticated early warning radars.

In February, the Russian military successfully test-fired a new interceptor missile from the Sary Shagan test range. The interceptor was apparently the replacement for the 53T6 short-range anti-ballistic missiles, which serve as part of an ABM shield.

During the same month, the Russian leader said in an interview with NBC’s Megyn Kelly Today that a new arms race had been started by Washington when it decided to withdraw from the 1972 Anti-Ballistic Missile Treaty in 2002. “If we are to speak of an arms race, then an arms race started precisely at that point,” he stated.

Indeed, the US has begun a nuclear build-up on Russian doorstep, extending its anti-missile shield to Romania and Poland, and deploying a battery of Patriot long-range anti-aircraft systems to Lithuania for the first time. According to Russia’s Deputy Defense Minister Alexander Fomin, the number of US anti-ballistic missile systems deployed in the vicinity of the Russian borders could soon reach as many as 400.

The US encircling Russia triggered a response from Moscow, which deployed its Iskander systems to its Kaliningrad exclave, citing the threat posed by US missile launchers in Poland and Romania.

Минобороны России
Published on Apr 1, 2018
Test launch of a new upgraded missile of the Russian missile defense system at the Sary-Shagan range

The United States "foreign affairs" magazine published the article said that Russia in March 26th from the Plesetsk launch site for the sixth time "Nuduoer River" missile, the missile has reached the height of satellite orbit, so the United States said that this is an anti satellite test, launch site for the test and Russia announced the location should be inconsistent. Another test.

The Russian "satellite news" website said that the missile launched in Saleh Sagan's test was a PRS-1M missile, or a 53T6M missile.

According to reports, Russia launched 53T6M missile launch test several times in 2016, and launched the same missile test in November 2017 and February 2018. The Russian Ministry of defense claims to use the missile to replace PRS-1 (53T6) missiles in the A-135 system, which is currently in the state of combat readiness, by the end of 2018.

Earlier, the Russian military expert Crowley Qinke said in an interview, "satellite news": "tested PRS-1M improved anti missile missiles in fact is a kind of new products, it will replace the established service life of the expiring active 53T6 anti missile. The quality and shape of PRS-1M is consistent with that of 53T6, but equipped with new engines and new missile borne wireless electronic devices, greatly improving the speed and height of missile interception and destroying the effectiveness of single and group targets. "

The Russian A system has used the anti missile missile with the same proportion line map, and the most right side is 53T6 and 51T6

Russia's "A" anti missile system deployed from the last century since 60s, has experienced 3 generations, the first generation A system using the V-1000 interceptor; by 70s, the upgrade to A-35 system; after 90s, Russia will upgrade it to the A-135 system; the system is now serving with the third major upgrades to Russia. Has the deployment of anti missile radar and computer system of the new generation, in the replacement of the missile, its combat capability will be improved.

The United States and the "diplomatic" mentioned in the report of "Nuduoer River" missile, believed to be a replacement of the "top 51T6" anti missile system, its intercept height greater than 53T6, can achieve near earth orbit height, and deployment locations are no longer limited to near Moscow, but by mobile deployment far from Moscow where the incoming missile midcourse interceptor implementation, similar to the U.S. standard 3 missile. But although the missile is maneuverable, it still needs to be controlled by a fixed anti missile radar network. Source: waonews.com

The prospective section and the device of the anti-missile PRS-1 / 53T6 / ABM-3 GAZELLE. The image is based on the projections of the Sprint rocket using the materials of the article on 53T6 on our website. COURT - engine control system with pulsed RTD of transverse traction, cone - ceramic nose cone (с) 08/08/2010. 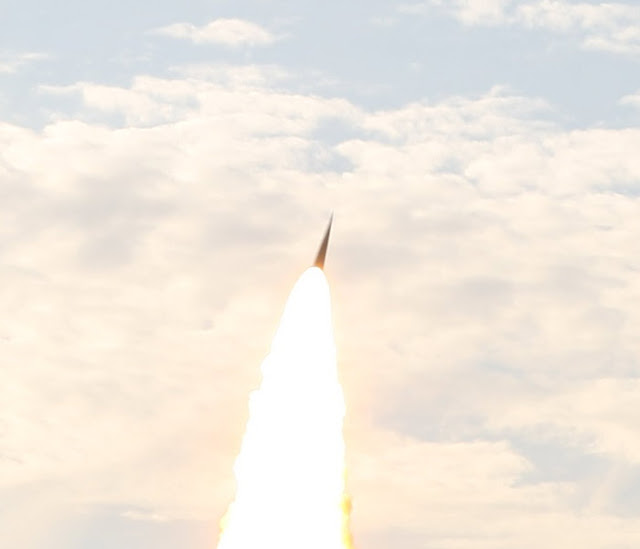 Maximum overloads:
- 210G longitudinal
- 90 G transverse
Angle of deviation of the rocket after launch - up to 70 degrees

Guarantee period of storage - not less than 10 years, possibly with extension to 15-20 years following additional tests and modifications.

Types of warheads :
- a nuclear warhead with an AA-84 combat unit with a capacity of 10 kt. CU with a blasting system was developed in KB-11 under the guidance of SG Kocharyants, a nuclear warhead filled with plutonium-239-VNIIEF (Arzamas-16) under the general supervision of Yu.B. Khariton.

- fragmentation warhead of a directional type, possibly similar to 9M83 ZKR S-300VM AFM and possibly developed on the theme of Rocket " Airplane-M"", 1990 or later, it is also possible that such a CU is used on the modification of the PRS-1M. The BC MAS 9M83 has a target destruction density of 5 mesh fragments per fragment of 15 grams of fragments per square meter .

The PRS-1 / 53T6 is an atmospheric mid-range missile interceptor, the main designer is Lev Lyuliev, the PRS-1M / 53T6M is an atmospheric medium-range interceptor, a modernized version of the PRS-1, the chief designer is Pavel Kamnev. under the 53T6M missile is understood the variant of the 53T6 interceptor with BL produced by the engine, and modernized management system. The first test (success) made December 20, 2011 at the 35th site Sary-Shagan. 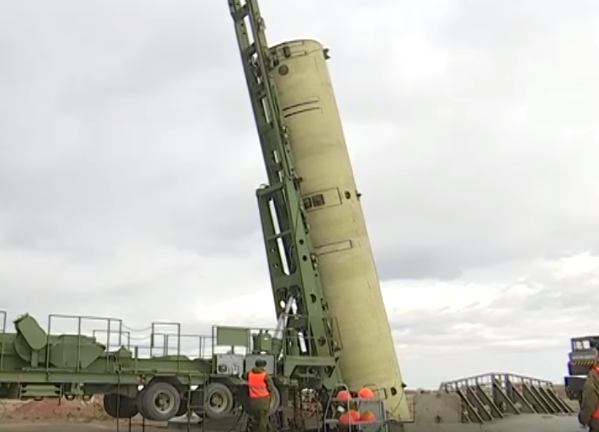 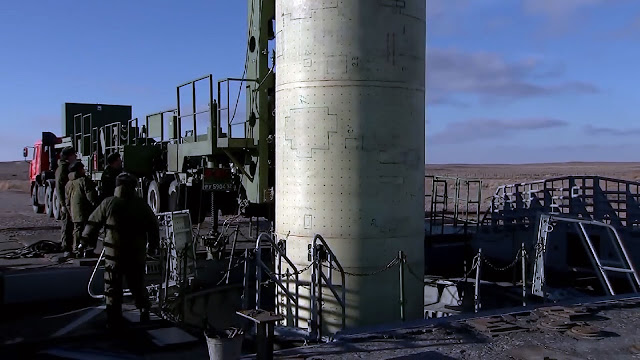 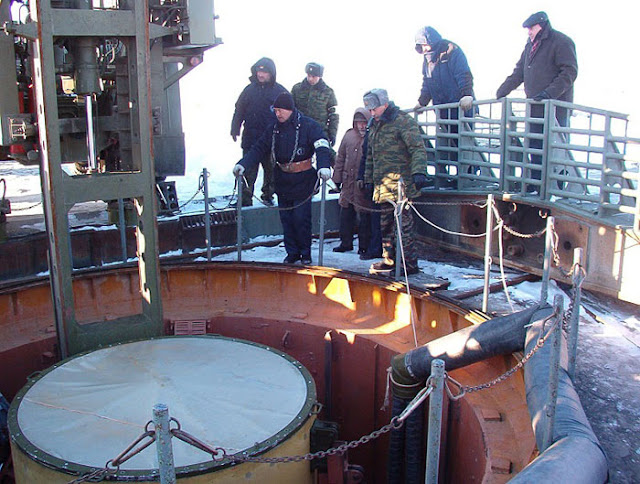 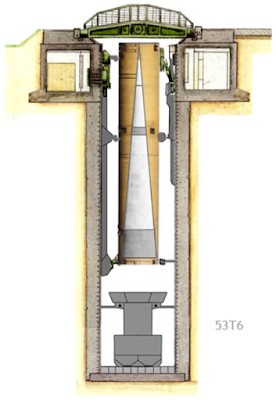 Mine launchers of 53T6 missiles (using the image of the NGO Vympel, reproduction from the Chinese military magazine, http://paralay.iboards.ru , photographs and drawings, version 27.04.2010).

Loading a TPK with a 53T6M rocket, the silo for the first time demonstrated a new transport and installation machine 77Yu6.02 with a truck tractor KAMAZ designed and manufactured by Iskra II Kartukov MKB 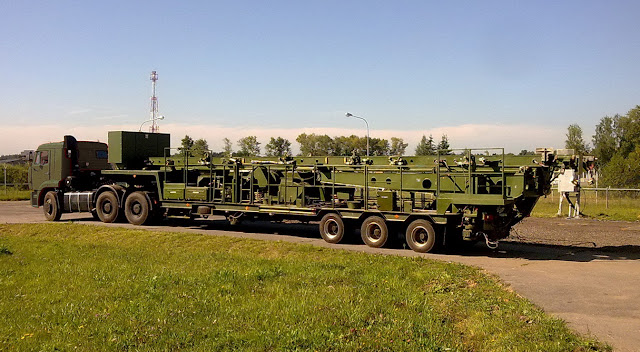 Control system of the complex: 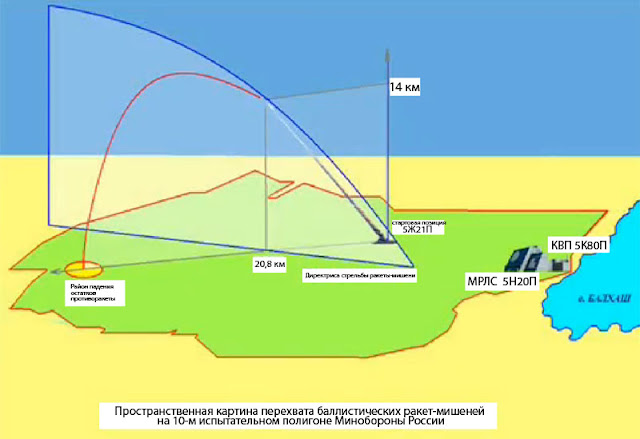 Spatial pattern of interception of ballistic missile targets at the 10th test site of the Ministry of Defense of Russia in Sary-Shagan at launches from the polygon launch site 5ZZ21P at the 35th site of the 53T6 missile (processed, source ). 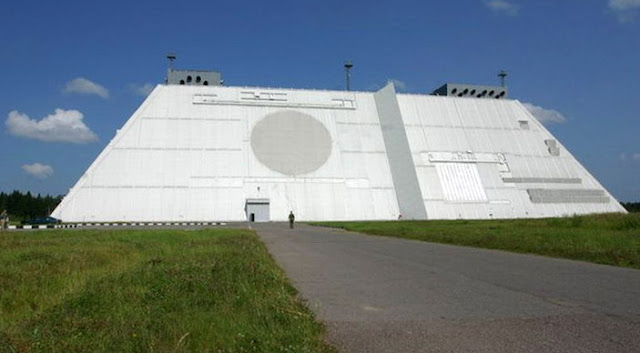 Source: militaryrussia.ru
Posted by Nawapon at 09:35