Analysis: Antonov An-188 competition for the A400M? 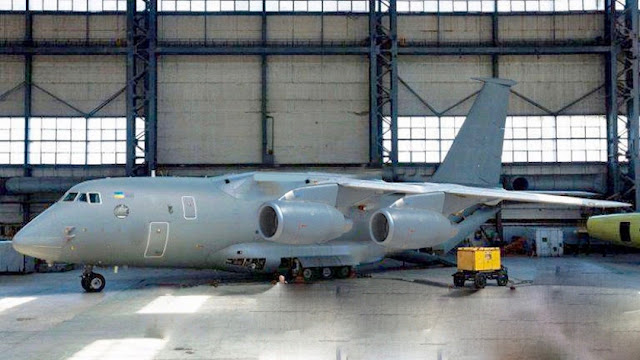 
The Ukrainian Antonov plant, currently owned by the Ukroboronprom group, is working on a new family of shortened takeoff and landing machine marked with An-188. The base for this construction is to be a modified structure of the An-70, whose four turboprops are to replace the same number of jet propulsion units selected by the potential customer. The machine will be created in cooperation with the Turkish aviation industry.

During the aviation show Eurasia-2018 in Antalya, Turkey concluded an agreement on cooperation between the Antonov corporation and the Turkish aviation industry in adapting the new construction to NATO standards in both equipment and operation. The negotiations were attended by President Antonowa Paweł Bukin and Ismail Demir, head of the Undersecretariat of the Defense Industry in the Ministry of Defense of Turkey. The project is to be involved, among others the Ukrainian companies Antonov and Iwczenko-Progress responsible for the production of engines and structures, and the Turkish companies TAI and ASELSAN, which are to support the westernization of the machine.

The base for the new machine is to be a successful, but unfortunately, buried by political problems, the four-engine An-70 turboprop. The first prototype rose to the sky in 1994 and, despite good performance, it became one of the many victims of the collapse of the USSR, and then the "divorce" of Ukraine with Russia. Even in 2012, Russia planned to purchase at least 70 machines of this type, and the production was planned to move from Kiev to Kazan. Political changes in Ukraine related to the Euromaidan victory, however, bury those plans, and the cooperation ended. 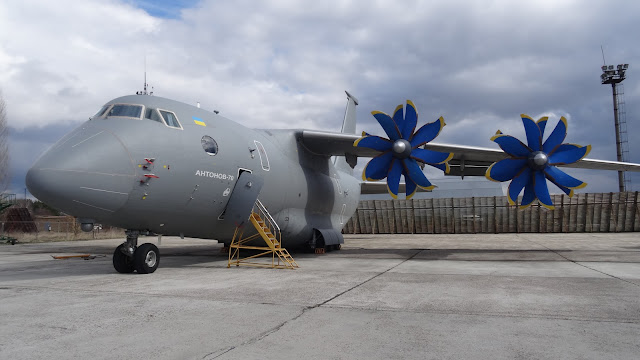 One of three copies of An-70 in Kiev. Fig. J.Sabak

The An-70 competitor closed the road to the west, the Airbus A400M Atlas, which took its maiden flight in 2009. Many experts claim that the constructors drew full advantage of the solutions used in the An-70, but they did not achieve such good results. There is no doubt that despite the division between the two constructions over a decade, the similarity is enormous. However, the A400M has been produced to this day in almost 70 copies (flying in the colors of five countries), while the An-70 is in the form of just three aircraft.

The idea of ​​developing a turbojet version Antonov An-70 with the option of using both domestic and western engines was created a few years ago. The Ukrainian producer tried to interest this project among others China (under the working name An-170 or An-77). Three years ago, during the Le Bourget 2015 Paris Air Show, Antonov presented for the first time to prospective clients, but above all to potential co-operators, the project marked An-188, to maintain a common nomenclature with a much smaller, but also turbojet, An-178 which had its world premiere there.

The An-188 aircraft, capable of transporting loads of up to 50 tonnes, are to be an intermediate link between the C-130 Hercules (about 20 tonnes lifting capacity) and C-17 Globemaster III (about 75 tonnes), being an interesting alternative to the turboprop A-188 400M Atlas. The use of turbojet engines instead of turboprops is to have a positive effect on performance and, above all, on operating costs.

It is planned to use, at least in the first versions, an almost unchanged An-70 hull, and mainly the changes are to affect the wings and engines. This can be seen even on the official "artistic vision", which is de facto photo montage of the An-70 photo but with new engines. There are planned as many as three versions of the drive, which due to the arrangement of high-wing with classic, single gondolas, is not a problem:

An-188-110 will have a new type of AI-28 engines, which Iwczenko-Progress is currently working on. They are created as the successor to the D-436 family, but with higher efficiency and lower fuel consumption.

An-188-120 is to be the most "NATO" version, equipped with CFM56-7B CFM International (CFMI) engines with the FADEC digital control system, used in the Boeing 737NG aircraft.

The visualization of the appearance of An-188-100 was created by digitally transforming the image of the An-70 aircraft and the An-178 engines. Fig. Antonov

All variants of the aircraft are to have a modern, fully digital avionics, a glass cocokpit and a communication system compliant with the NATO standard. The aim is to open new markets in front of Antonow, in which experience and Turkish support are to be helpful.

Depending on the version, detailed performance may be subject to some changes, but the whole family of An-188 aircraft is to be characterized by STOL (short take-off and landing) capabilities enabling operation from unpaved airstrips less than 800 meters long, light depending on the load being carried and the type of the substrate. The range with a standard load of 20 tons is to reach 7,700 km, more than a thousand km more than in the case of An-70 and 1,300 km more than the Airbus A400M. The operational ceiling is to be 12,100 meters and the cruising speed will be over 800 km / h.

As for the transport capabilities, the An-188 will have the flexibility provided by the well-developed two-level An-70 hold. It allows simultaneous transport of 110 soldiers on the upper deck and a wide range of cargo on the lower deck, including large dimensions, containers or pallets. Inside the cargo holds, for example, a Puma helicopter or an armored personnel carrier, and there is still room for over 40 soldiers with full equipment. From the deck, it will be possible to command with the use of parachutes, e.g. 130 soldiers and vehicles or 20 tons of cargo on pallets. The total space of the holds is over 400 m 3 , which can be filled with 50 tons of cargo or 300 soldiers.

While the real performance will be close to the assumed level, the An-188 planes can enjoy great interest of both armed forces as well as other organizations that use contaminated landing sites of small size. Currently, not only Turkey and Ukraine, which are to cooperate in this project, but also the United Arab Emirates expressed interest in obtaining such machines.