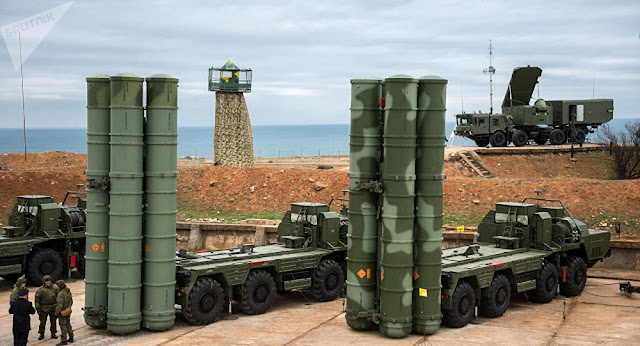 Recently, Moscow has made a decision to speed up the delivery of S-400 to Turkey as Ankara expressed willingness to purchase these missile defense systems. Meanwhile, Washington has repeatedly argued that Turkey's acquisition of S-400 from Russia is not in line with NATO's interests.

"We continue to work to keep the Turks in a place where they don’t actually acquire the S-400. I believe that they have not yet and we are hopeful they will never take possession," Pompeo said during testimony before the US House Foreign Affairs Committee.

When asked whether the State Department had made a decision about Turkey’s purchase of F-35s, he answered, "I have not."

In the meantime, a spokesperson of the Turkish Undersecretariat for Defence Industries told Sputnik earlier on Wednesday that the first F-35 fifth-generation fighter jet would be handed over to Turkey on June 21. The Turkish Undersecretariat for Defence Industries published a video showing the take-off of the F-35A from aircraft developer Lockheed Martin's airfield in Fort Worth, Texas, saying it showed the jet purchased by Turkey. According to media reports, one such aircraft would cost Ankara about $103 million.

In mid-April, US Assistant Secretary of State for European and Eurasian Affairs Wess Mitchell said Ankara's purchase of the S-400 air defense missile systems from Russia could negatively affect the delivery of fifth-generation F-35 fighter jets to Turkey. Turkish Foreign Minister Mevlut Cavusoglu responded by saying that Ankara would take retaliatory measures against Washington if it blocked the delivery of these jets.

According to US State Department spokesperson Heather Nauert, the nature of the US concerns with Turkey’s purchase of the S-400 systems centers on the weapon’s interoperability with NATO armaments and is not about sanctions under the Countering America's Adversaries Through Sanctions Act (CAATSA) of 2017.

The CAATSA allows the United States to impose sanctions on entities and individuals that operate on behalf of Russia's defense or intelligence sectors, as well as those engaging in transactions with these sectors. The United States has warned other countries and private sector firms that significant transactions with Russian entities listed by the US Treasury Department would be sanctioned.

At the end of April, Cavusoglu said Turkey does not accept sanctions from NATO partners when discussing deliveries of the Russian S-400 systems, stressing that the S-400 sale was completed before new CAATSA sanctions can be implemented. He also pointed out that Turkey would consider purchasing the US-made Patriot missile defense system or other air defense systems if it was able to get a fair offer from its NATO allies.

In December 2017, Russia and Turkey signed a loan agreement to supply S-400 air defense systems to Ankara. According to a statement by the Turkish defense industry secretariat, two S-400 batteries will be operated and serviced by the Turkish military. In April, Alexander Mikheev, the director general of the Russian state arms exporter Rosoboronexport, said Russia had started manufacturing S-400 systems for Turkey.