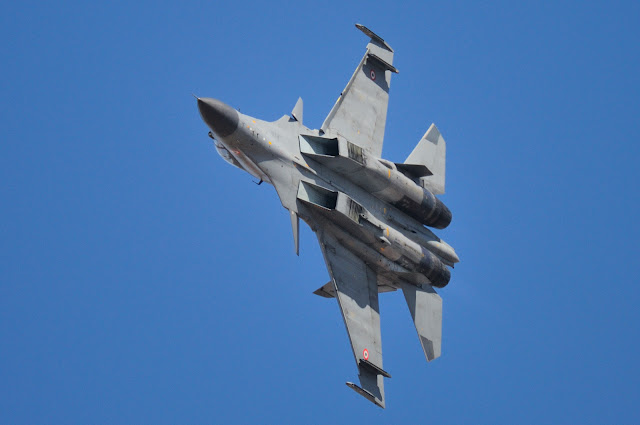 
IAF not keen on getting more Sukhoi fighter jets

At a time when the Russians have offered to sell 40 more Sukhoi-30 combat aircraft to India, it seems that the Air Force is not keen to add more of these heavy weight and expensive to maintain fighter jets in its inventory.

The Indian Air Force (IAF) already has more than 220 of these Russian planes in its fleet and has plans of inducting all the 272 planes ordered by it over the years by the end of 2020.

"The Russians along with the Hindustan Aeronautics Limited (HAL), which assembles the planes in India, have offered to sell 40 more of these planes to the Air Force but the Air Force does not seem to be very keen on acquiring them due to the heavy cost of maintanence which makes them very expensive to manage in the long run," government sources told Mail Today.

The Air Force also feels that it has already acquired the required number of fighter planes in the heavy weight category as almost 50 per cent of its fleet comprises the Sukhoi-30s and the plane would be the mainstay of the force in the next few decades, the sources said.


The Indian Air Force does not seem to be very keen on acquiring 40 more Sukhoi-30 combat aircraft due to the heavy cost of maintenance which makes them very expensive to manage in the long run.


On the claims by the vendors that the Sukhoi-30s cost almost one-third of the French Rafale 36 of which would be joining the force in 2019, sources said the Russian plane costs three times more for maintenance than its existing western origin plane taking into account the man hours required for keeping the plane serviceable.

The orders for Russian Sukhois have been placed by the previous governments in different blocks due to the delays in the induction of the indigenous LCA and failure in acquisition of a medium weight multirole combat plane in the last two decades.

The Air Force at the moment is facing a shortage of almost 12 squadrons from its sanctioned strength of 42 which it feels would be required to meet the requirements of a two-front war.

During its recent exercise Gaganshakti held across the country, the force carried out extensive flying with the Sukhois where the cost of operating the Russian planes was higher than the other western origin planes in terms of per hour of flying.

The maintenance of the Russian Sukhois has been a cause for concern for the Air Force as the serviceability of the planes has hovered around 50 per cent mark in many years.

American F-18 and F-16, Russian MiG 35 and the Swedish Gripen are considered to be the serious contenders in a new Air Force project for which a request for proposal is likely to be issued by the defence ministry before the end of this year.

Last I checked the Rafale cost more to operate and if India had bought the Su-30MKI instead of the 36 Rafale they could have gotten 108 Su-30MKI and saved huge amounts of money on operations and infrastructure.  It could have also alleviated the shortage of fighter jets currently faced by the Indian Air Force.