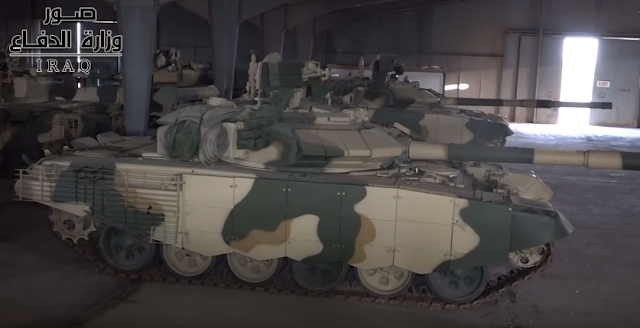 The Iraqi 35th Brigade of the 9th Panzer Division received 39 T-90S tanks. Russian-made cars replaced the American M1A1 Abrams, which were in service with the brigade before that time, writes Jane's.

As noted, the Iraqi military is already familiar with the new technology - to master it they were helped by experts from  Russia .

According to the Ministry of Defense of the Republic, the American "Abrams" transferred to the 34th brigade, which previously used the T-72S tanks, on the basis of which the T-90S was eventually developed.

The first batch of Russian T-90S was delivered to  Iraq in February 2018. It was noted that under the terms of the treaty, Russia would transfer 73 tanks to the republic. Deliveries were planned in stages.

Before that, a video appeared from the port of Ust-Luga in the  Leningrad Region , which shows the loading of T-90S tanks for dispatch to Iraq.

The company-manufacturer of tanks - the scientific and production corporation "Uralvagonzavod" - informed about deliveries in 2017 . Later, Vladimir Kozhin , the Russian presidential aide on military technical cooperation, confirmed that Russia and Iraq had signed a contract for the supply of T-90 tanks, which proved themselves in  Syria .

T-90S is an export version of T-90. On the tank there are no spotlights "SHTORA", but instead they are equipped with additional blocks of built-in dynamic protection. Also the armored car is equipped with air conditioning.