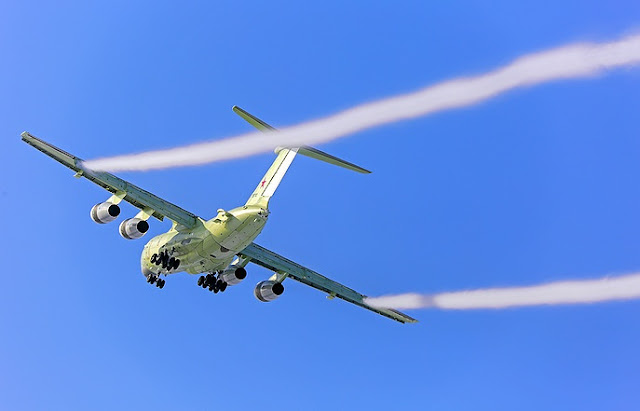 "The Il-78M-90A aircraft built at the Ulyanovsk-based Aviastar-SP Aviation Enterprise is now undergoing its stage of ground trials that include, in particular, a check of its fuel system. Once they are over, the refueling aircraft will be delivered for a paint finish, after which it will be transferred presumably to the Ilyushin Company in July for factory flight tests. Everything is proceeding according to the standard procedure and there are no schedule delays," he elaborated.

At present, the stage of ground tests is underway. The check of the aircraft’s fueling system and the air tightness of its fuel tanks has been completed.

As Head of the Aviastar-SP Flight Testing Station Yuri Kapsha said, the aircraft’s fueling system is designed to supply fuel to its basic engines and the auxiliary powerplant. The trials of this system passed successfully and there were no deviations from the parameters that had been set, he added.

"Apart from the fuel system, the ground tests will also involve engine runs, comprehensive trials of the landing gear-retraction and extension and a check of all the aircraft’s systems for their electromagnetic compatibility," the press office of the transport aviation division at the United Aircraft Corporation said.

Russia’s improved aerial refueler modification is derived from the latest Il-76MD-90A military transport plane while its design, the development of design documentation and its production were carried out using modern digital technologies.

The advanced aerial refueling plane boasts an increased flight range thanks to its four PS-90A-76 new-generation engines and can take a larger amount of fuel on its board for aircraft refueling compared to previous models. These engines consume 12-14% less fuel than the D-30KP motors mounted on earlier modifications of aerial fueling tankersvv

Besides, the latest refueler features a completely new aircraft navigation system and also an all-glass cockpit, which helps reduce the crew workload and enhance flight safety.v

The aircraft is furnished with three hose and drogue air refueling pods: two units on the outer wings and one on the right side of the rear fuselage. The Il-78M-90A will be capable of refueling two frontline aviation planes at a time. The tail unit allows refueling long-range and special aviation aircraft. On the ground, the Il-78M-90A can simultaneously refuel four planes.

The Il-78M-90A can be used as a military transport plane. Re-equipping won’t require a large volume of work and can be carried out in aerodrome conditions. If necessary, fire-fighting equipment can be mounted on it.