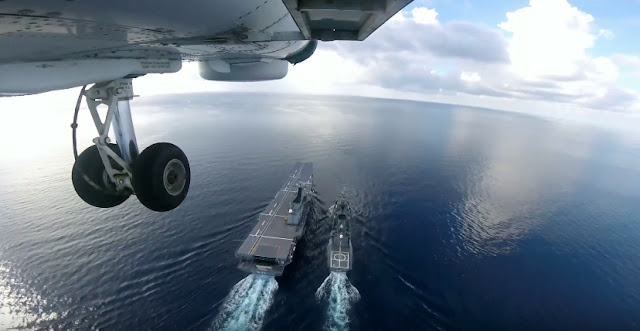 Documents published by the government’s Bureau of the Budget show that the new expenditure is an increase of THB9.16 billion – or 4.2% - over actual defence spending in 2018.

The defence budget accounts for 7.6% of proposed national expenditure for 2019 and about 1.4% of GDP. The expenditure – tabled by Prime Minister Prayut Chan-o-cha on 7 June and approved by the National Legislative Assembly on the same day – comes into effect at the start of the fiscal year in October 2018.


Thailand on Thursday (June 7) sought US$10 billion (S$13.32 billion) in a new defence and security budget, in what may be its final opportunity to allocate funds to the armed forces before a promised return to elections early next year.

Military spending has risen since former army chief Prayut Chan-o-cha seized power from the civilian government in 2014, fitting a pattern of Thai generals generously boosting budgets during their periodic coups.

The figures, proposed to the junta-picked National Legislative Assembly for the 2019 fiscal year, represent US$7 billion for defence, a US$1 billion increase since the military seized power four years ago.

In addition, the regime wants US$3 billion more in security plans meant to manage "new threats", maintain "internal peace and order" and prevent transnational crimes and cyber attacks, as well as protect the Thai monarchy.

The new budget is part of a 20-year national strategy laid out last year that is legally binding for future administrations to follow. Source: straitstimes.com

Actually it rises in line with GDP growth therefore, it is constant at 1.4 to 1.5 % of GDP


In Southeast Asia, the largest military spenders are the tiny Singapore ($10 billion) and Indonesia ($8.2 billion), followed by Thailand and Vietnam (about $5-6 billion), and Malaysia and Philippines (around $4 billion). 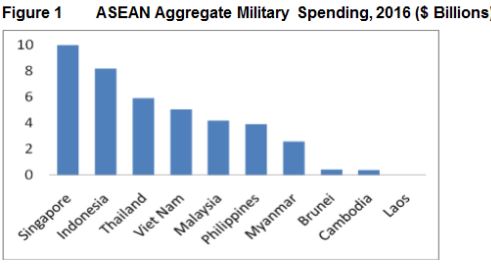 The per capita picture is very different. In this view, Singapore ($1,750) and Brunei ($940) are ASEAN’s big spenders, far ahead of Malaysia ($136). What this means is that, in per capita terms, Singaporeans spend on average 46 times more than the Filipinos in their military. In the past, Myanmar puts almost as much money into the military as Vietnam ($53) and more than the Philippines ($38), whereas Indonesia is a more moderate player ($31). 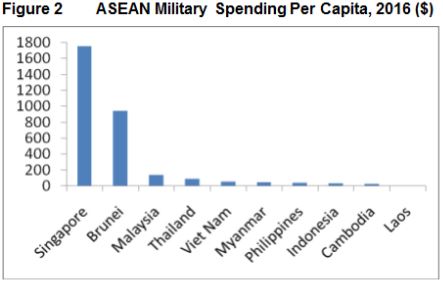 Source: econintersect.com
Posted by Nawapon at 17:11