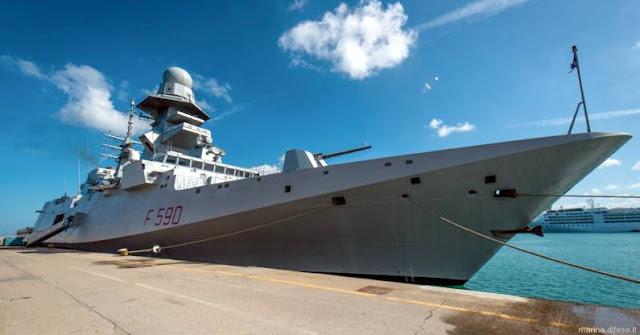 Competition is heating up in the race to build the Navy’s next warship, with foreign and U.S. manufacturers vying for a multibillion-dollar opportunity.

In February, the Navy announced it had shortlisted five shipbuilders for the FFG(X) program, which calls for a replacement for the littoral combat ship.

Lockheed Martin, General Dynamics, Huntington Ingalls, Austal and Fincantieri were awarded research-and-development contracts this year, and the service expects to pick a single company to oversee the program in 2020.

The opportunity has sparked a competitive scramble among the five companies shortlisted for the project. Fincantieri, a Trieste, Italy, manufacturer that maintains a U.S. shipyard in Wisconsin, took the opportunity last week to showcase the ITS Alpino warship in Baltimore, while the Italian navy embarked on a tour along the U.S. Eastern Seaboard.

“What we’re trying to do with this visit is show the U.S. Navy what the art of the possible is,” said Richard Hunt, a retired U.S. Navy vice admiral who is Fincantieri’s chief strategy officer.

The Navy and White House have been decidedly more modest about the military’s shipbuilding plans since Donald Trump said on the campaign trail that he wanted to build a 350-ship Navy. Estimates put together by the Congressional Research Service and the Congressional Budget Office found that the Navy’s long-term shipbuilding plan to build a 355-ship Navy would not be attained until at least 2050 under current budgets. (The Navy has fewer than 300 ships today.)

Still, the warship competition is a major long-term opportunity for whichever manufacturer becomes the primary contractor. The Navy plans to stop buying the littoral combat ship, which has been criticized for growing costs and concerns over whether it could adequately sustain battle damage. The Navy wants to start buying the new frigates in 2020, which leaves little time for R&D.

After that, the service plans to buy 20 frigates, one or two per year, at an estimated cost of $800 million to $900 million each. The Navy’s 2019 budget requested $134.8 million in R&D funding for the program as the Navy moves toward selecting a manufacturer, and expects to spend between $850 million and $1.8 billion for the program annually from 2020 to 2023, according to the CRS.

Companies such as Fincantieri, General Dynamics and Lockheed Martin, which specialize in massive procurements of large pieces of military hardware including ships and jets, are trying to capitalize on a broader policy shift that has moved the Pentagon’s spending priorities away from counterterrorism, and instead on buying advanced weaponry designed to deter foreign aggression.

Gigantic and intimidating weaponry is back in vogue, these companies say. And with the U.S. defense budget growing again, acquiring such gear might be more viable.

“With Russia and China really going gangbusters as far as aggressiveness and capability, it calls attention to filling the void as far as the frigate is concerned,” said Hunt, the Fincantieri executive. “We’re in a Cold War-type environment again.”

To start buying ships by 2020, the Navy is asking for something that has already been produced and demonstrated elsewhere. The contractors shortlisted for the opportunity are mainly pitching souped-up versions of warships that are in service now.

Austal USA, an Alabama-based subsidiary of an Australian shipping company, is one of two manufacturers behind the Navy’s littoral combat ship. It is pitching a modified version of its earlier product, something that could offer the Navy an easier transition between systems.

General Dynamics, which operates a shipyard in Bath, Maine, is pitching a 6,000-ton frigate used by the Australian, Spanish and Norwegian militaries. Lockheed Martin has sold the Saudi government on its design. And Fincantieri’s FREMM model is in use by navies in Italy and France.

The combat capabilities offered by Fincantieri’s ship are similar to what the U.S. already has, so the company is pitching its product as more “sailor-focused.”

“My navy is little, and when we come to America everything seems bigger and better, but everybody tells me, ‘Your ship is beautiful,’ ” said Mario Olivieri, an Italian navy ensign and the public information officer for the ITS Alpino.

Built for a smaller crew, the ship boasts an internal spaciousness that cuts against most U.S. Navy ships, where sailors are packed into tight living quarters. Hunt has said that the design of the ship’s bridge, for example, could lead to heightened safety for the Navy because it gives sailors a 180-degree view of the area at the front of the ship.

Hunt pointed to an Aug. 21 incident in which the USS John McCain, an Arleigh Burke-class destroyer, collided with a merchant vessel in the waters off Singapore, killing 10 sailors. It was one of several incidents that the Navy has faced in the past year.

It is unclear whether equipment deficiencies played a role in the crash. A U.S. Navy investigation concluded that officers were at fault, blaming “complacency, over-confidence and a lack of procedural compliance” on the part of specific individuals in the collision. A naval officer recently pleaded guilty to dereliction of duty in the case.

Still, Fincantieri has said better visibility from the ship’s bridge might prevent collisions.

“The design drives the way people behave,” Hunt said. “So many people could have stopped that situation, but they didn’t because people were clustered together, looking down at computer screens.”