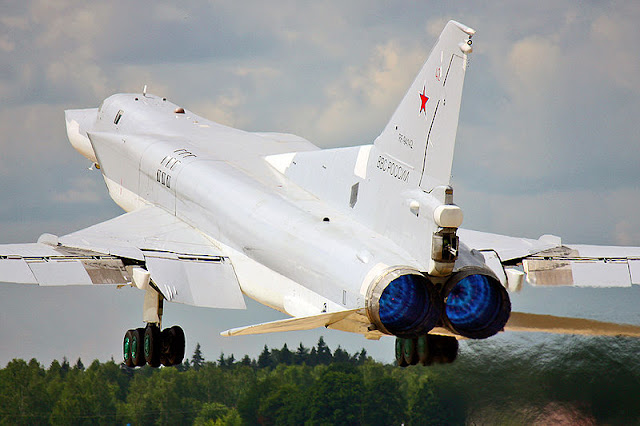 The Tu-22M3M variant of the Tu-22, a supersonic variable-sweep wing bomber, is to make its maiden flight in August and enter into service in October. The Russian Air Force operates 62 Tu-22M3s. Some of the planes have carried out combat missions in Syria. According to the plans that have been announced, 30 TU-22M3s will have been modernized to meet the M3M standard by 2020. This aircraft is not classified as a heavy bomber and therefore is not covered by the New START treaty.

It has the following specifications: a maximum speed of 2,300 km/h; a cruising speed of 900 km/h; an operating ceiling of 13,000 m; a maximum altitude of 14,000 m; a rate of climb of 15m/s; an operational range of 7,000 km (10,000 km with air refueling); an empty weight of 53,500 kg; a maximum takeoff weight of 126,400 kg; and a crew of 4. The pressurized cockpit is fitted with climate-control systems. The plane is powered by two NK-25 turbofan engines with large air intakes and dual exhausts. Each engine produces a maximum thrust of 25,000 kg. With its tricycle gear, the aircraft can land on unprepared runways.

The armament suite includes a Kh-32 long-range, multi-purpose missile specifically designed to attack US Navy carrier strike groups with a nuclear or conventional 500-kilogram (1,102 lb) warhead. It can hit land targets as well. The list of enemy assets it is capable of knocking out includes radar equipment, large vessels, bridges, power stations, command posts, and other military installations. Equipped with an inertial navigation system and a radio-radar seeker, it need not depend on satellites for guidance, making it immune to jamming.

The missile flies along a unique trajectory, climbing to the stratosphere (40 kilometers) after launch and then either going straight down to hit the target or executing a shallower dive in order to approach it flying as low as five meters above the surface. At such a low altitude the Kh-32 cannot be detected by radar until it is only about 10 km away, leaving a reaction window of approximately 10 seconds. Fast and maneuverable, air-defense systems have little opportunity to fend it off. The SM-6 surface-to-air-missile (SAM), America’s best air-defense tool, is useless against the Kh-32.

It has an operational range of up to 1,000 kilometers and a maximum speed of 5,400 kilometers per hour (1,500 meters per second) during the terminal phase of its flight.

The Tu-22M3M can carry three KH-32s (weighing about six tons each) or 12 of the lighter Kh-15 missiles. The Raduga Kh-15 is an air-to-surface hypersonic aero-ballistic weapon with an operational range of 300 km. The aircraft will be able to carry six to eight Kh-SD medium-range (up to 2,000 km) cruise missiles, and there are plans to develop and produce it under the auspices of Russia’s State Armament Program for 2018–27 (GPV-2027).

Its payload is also made up of FAB-250 or FAB-1500 free-fall bombs. The aircraft is armed with a double-barreled GSH-23 (23 mm) gun installed in the remotely controlled tail turret.

The Tu-22M3M uses the SVP-24 all-weather special computing subsystem for precise guidance. The GLONASS satellite navigation system constantly compares the position of the plane and the target. The SVP-24 measures environmental parameters to correct the flight. Information is received from all datalinks to compute its flight envelope. There are enough sensors to enable targeting even if the GLONASS receivers are jammed. With fire-and–forget guidance in place, the pilot can concentrate on countering threats and finding new targets to hit.

Currently Russia’s strategic aviation fleet is undergoing an extensive revamping. The modernization of the Tu-160 supersonic strategic heavy bombers is underway and due to be complete by 2030, along with the Tu-22M3M upgrade. The Russian Air Force’s ability to attack enemy assets as an element of conventional, not nuclear, warfare will be greatly expanded. The conventional strike capability of its armed forces is to be augmented by adding relatively low-cost multipliers to their existing arsenal of conventional offensive long-range weapons. This will significantly enhance its power projection capability. The conflict in Syria has been a good example of this. The successful updates to Russia’s long-range aviation forces illustrate the ability of the Russian defense industry to meet the challenges of today.

This article was published by Strategic Culture Foundation on June 9th