U.S. government is proceeding to deliver the first F-35 to Turkey on June 21 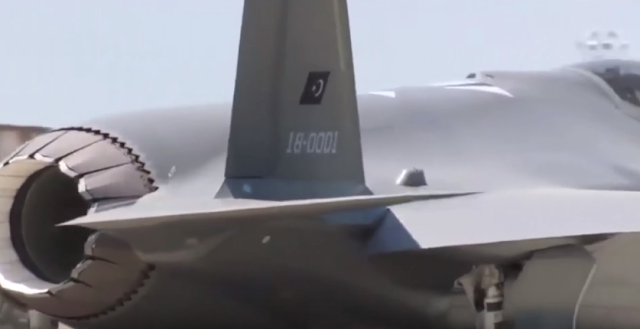 
Despite some opposition, US on course to deliver F-35s to Turkey on June 21

WASHINGTON — The U.S. government is proceeding with plans to deliver the first F-35 to Turkey, with the country set to accept its first jet on June 21 despite opposition from some in Congress.

A Lockheed Martin spokesman confirmed to Defense News that it’s still gearing up for a rollout ceremony at its production facilities in Fort Worth next week.

“The F-35 program traditionally hosts a ceremony to recognize every U.S. and international customer’s first aircraft. The rollout ceremony for Turkey’s first F-35 aircraft is scheduled for June 21,” the spokesman said in a written statement to Defense News.

“The aircraft will then ferry to Luke Air Force Base, Arizona, where Turkish pilots will join the F-35A training pool.”

The Senate is set to vote this week on the annual defense policy bill, which includes language that would prohibit the U.S. government from “transfer of title” to Turkey until the time that the Defense Department submits a report to Congress on removal of Turkey from the F-35 program.

But even if that language succeeds in the Senate, the defense policy bill will proceed to conference, where a group of armed services committee members will hammer out differences between the House and Senate versions to emerge with a single, final piece of legislation. That process could take months.

Congress’s opposition to allowing Turkey to purchase the F-35 hovers around two points: the country’s detainment of American pastor Andrew Brunson and a deal to purchase the Russian S-400 air defense system.

But for now, it appears that the Defense Department has no plans to keep Turkey from getting its first F-35 or to put restrictions on its use at Luke AFB.

Thomas Goffus, the Defense Department’s deputy assistant secretary of defense for Europe and NATO, acknowledged during an Atlantic Council event Wednesday that Turkey’s acquistion of the S-400 could present the U.S. military and NATO alliance with added technical risks.

But he would not go as far to spell out what actions the Defense Department is considering or could consider later down the road — perhaps a sign that the Pentagon is waiting to see how this legislation shakes out.

“We have a process to evaluate the risks to Western technology that that [procurement] would present. Our preference is that they do not acquire the S-400,” Goffus said.

“Given that, they are a sovereign nation, and they are trying to take care of their defense needs,” he added. “What restrictions are placed on them and what Congress will eventually pass, I can’t even speculate on it on this point.”

By the time Congress passes legislation that could curb Anakara’s F-35 ownership, the country will likely have already started building up its first squadron at Luke AFB. There, Turkish pilots and maintainers will train alongside U.S. ones, moving from academic courseware to live flights.

NATO and U.S. Defense Department officials have warned Turkey that if it continues down the path of purchasing the S-400, it will not be able to plug it in with NATO technologies like the F-35. SASC, in its policy bill, echoed those concerns, saying that Turkey’s purchase of Russian hardware would “degrade the general security of the NATO alliance […] and degrade interoperability of the alliance.”

After a meeting in Washington with U.S. Secretary of State Mike Pompeo earlier this month, Turkish Foreign Minister Mevlüt Çavuşoğlu expressed confidence that the United States would not only deliver the first F-35 to Turkey as planned, but that it would ultimately decide to continue F-35 sales to Turkey.

“Turkey rejects threatening language from the U.S. on the issue, it is not constructive,” Çavuşoğlu said on June 4, according to a report from the Turkish newsgroup Anadolu Agency.

Turkey plans to buy 100 F-35As. As a partner of the program, its domestic defense industry helps build the Joint Strike Fighter. Most notably, Turkish Aerospace Industries’ serves as a manufacturer of the aircraft’s center fuselage. It has also been chosen as a sustainment hub for the international F-35 community.

Den ProHD
Published on May 23, 2018
Turkish Airforce F-35A made its maiden flight