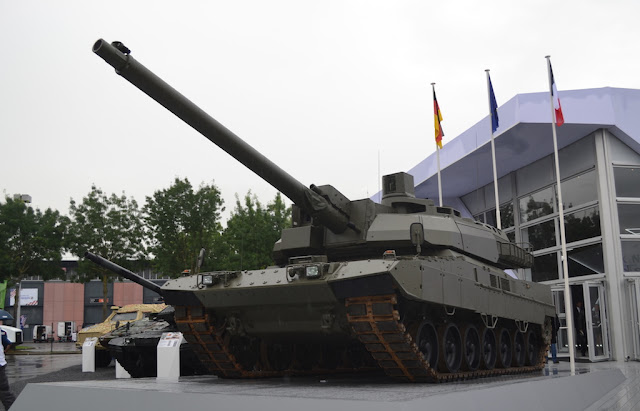 The EMBT has been developed by KNDS – a joint company between German Krauss-Maffei Wegmann (KMW) and French company Nexter – and combines a Leopard 2 chassis with a Leclerc 120mm turret.

Officials from KNDS told Shephard that the development effort has been ongoing since January 2017, with the prototype platform conducting live fire trials only a month ago.

‘This is the first step in having a common product from Nexter and KMW,’ said Rudolf Neuhaus, project manager for EMBT for KMW. ‘This is a demonstrator but the next step will be to have a prototype or pre-series production.’

A joint Nexter-KMW team has now been established that will go into more detailed analysis of integrating French-German technologies.

‘It is a way of showing that we are now working together,’ said Francois Groshany, Nexter’s head of tracked armoured programmes.

He added that because the Leclerc features a lighter autoloading turret, compared with the manually loaded Leopard 2, the EMBT is lighter and has a growth potential of around 6t (10% of the EMBT's 60t GVW).

This effort has been funded by KNDS and is not a German or French government programme. Work done on the demonstrator is expected to inform technology and cooperation requirements for a future MBT that will enter service in the 2030s.

The German and French governments are currently studying a new joint MBT under a programme known as the Mobile Ground Combat System (MGCS).

‘We can develop and qualify this in the time between MGCS,’ said Groshany, who called the EMBT an ‘opportunity product’ to gauge operational interest as well as strategic interest in a pan-European project.

For the EMBT, one of the main challenges has been to integrate the electronic and mechanical interfaces between the turret and chassis. ‘It was not easy…there was a lot of engineering effort on the chassis side,’ said Neuhaus, speaking to Shephard at Eurosatory.

The chassis is based on the latest A7 variant of the Leopard 2, with mobility trials also complete with the Leclerc turret integrated.

He added that this was, for the time being, the limit as to how much technology can be shared between the two countries, owing to German legislation. ‘This is the limit that we can go …due to German law we cannot exchange technologies.’

KMW and Nexter merged to form a joint company in 2015.