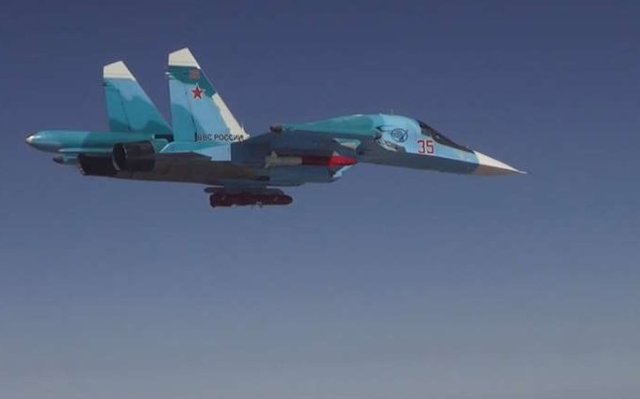 Russia’s Tactical Missiles Corporation (KTRV) new Grom tactical air-to-ground missile is undergoing flight tests in readiness for commencing series production in November, according to a company presentation). Flight tests of the Grom, carried out on an Su-34 fighter-bomber, began at the end of 2017; according to the presentation, state evaluations will continue until September 2018.

KTRV’s 9A-7759 Grom (Thunder) is a new tactical missile development revealed in 2015. The Grom design is based on the Kh-38M missile, which was cleared for series production in 2015. KTRV director general Boris Obnosov said in 2015 that wings were added to the Kh-38M and the design was partially modified.

Very hard to get any data found only some in forums 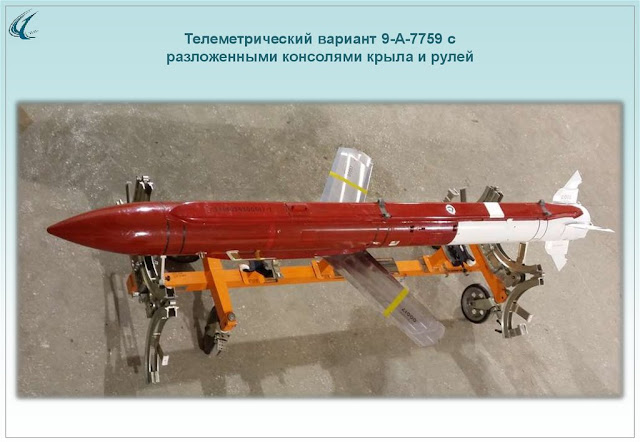 Officially, these weapons for Russian front-line bombers and multi-purpose fighters are called the "Managed Complex of Missile-Bomb Weapons" under the index 9-A-7759 and refers to the projects of the "Thunder" family. The ammunition was developed for point-based air strikes against industrial facilities, airfields, mine rocket launchers and clusters of military equipment.

Structurally, the bomb has been solved in a modular scheme and is presented in three versions: with a powerful fragmentation-explosive, volumetric detonating charge or additional incendiary. The air bomb is launched by the so-called ejection method - before dumping the pilot goes into climb and makes a maneuver "hill." When separating from the carrier, the "Thunder" starts the starting engine, giving additional acceleration when diving towards the target. 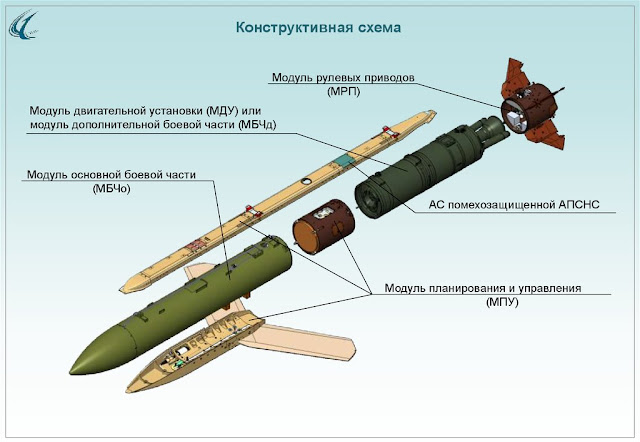 In flight, the bomb is controlled by an anti-interference inertial guidance system, which also uses GLONASS and GPS satellite signals. The error in aiming at the target, according to the developers, does not exceed eleven meters.

One of the brand features of the ammunition is the possibility of striking ground targets located behind the carrier. This allows the projectile to immediately go to the specified drop trajectory, without spending time to stabilize after starting. In addition, with this method of discharge, the accuracy of the bombing significantly increases.

The lightest modification of the bomb weighs 488 kilograms, the heaviest - 598 kilograms. In the first variant, the weight of the combat unit is 315 kilograms, in the second and third - 480 and 370 kilograms, respectively.

Thrown from the plane "Thunder", depending on the modification, flies to 65-120 kilometers. The retractable wings help in this. In addition, to increase the range of one of the options for the bomb designers have equipped with a marching engine. Member of the expert council of the board of the Military-Industrial Complex Viktor Murakhovsky explained to RIA Novosti that the new bomb is a long-awaited development. Now China and Korea are working on weapons of this type.

"The product was created in a short time and uses the GLONASS system for high-precision target destruction, without which nothing would have happened," Murakhovsky said.

According to him, the bomb serves as a universal "surgical" instrument for air operations without entering the zone of enemy air defenses. And the accuracy of hitting the facility does not depend on the qualification of the pilot - everything is provided by the satellite navigation system.

To the destination of "Thunder" are able to deliver virtually all multipurpose fighters and front-line bombers in service with the VKS: heavy Su-30SM, Su-35S, Su-34, light MiG-35SMT, MiG-29 and even deck Su-33, based on the cruiser Admiral Kuznetsov. Also, the Su-24 bombers, which form the basis of front-line strike aviation, can carry the new bomb. Murakhovsky suggested that the latest version of the shell-transformer will be shown to the general public at the forum "Army-2018" in August.

The developers tested "Thunder" in various climatic conditions, in dust and sand, under the influence of precipitation, tested for resistance to electromagnetic and other disturbances. Flight-design tests confirmed the basic tactical and technical characteristics of the ammunition. As carriers, the Su-34 multipurpose bomber and the MiG-35 fighter were used. They carried out thirty flights with new weapons, conducted emergency discharges, discharges to "non-explosion," and used several telemetric mock-ups. Source: ria.ru