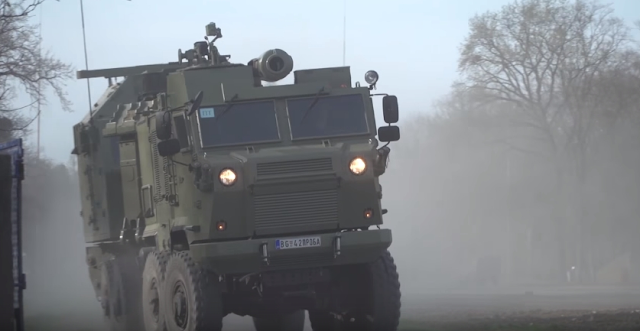 Yugoimport SDPR is showcasing a number of its new capabilities at Eurosatory in Paris, including vehicles, rockets and artillery systems, as it targets international export opportunities.

One of the systems the state-owned Serbian company is displaying is the Lazar, an 8x8 APC which is currently in production for an unspecified Asian customer.

‘The Lazar is in use with the Serbian Army and Police… 12 APCs have been delivered to Serbia within the last year or two,’ Marko Stojanovic, promotion consultant at Yugoimport told Shephard.

According to Stojanovic, there has also been significant interest in the 8x8 APC from Middle Eastern, African and other Asian nations.

The Serbian army and interior forces initially ordered 20 vehicles in 2016, followed by a recent delivery of an additional 12 units.

First unveiled in 2016, the vehicle is manned by three crew members and features a remote control weapon system capable of integrating different calibre guns from 12.7mm up to 30mm.

The Lazar III features a 520hp Cummins engine, Tyron runflats tyres, along with a drive line system provided by Timoney.

Previous configurations of the vehicle have featured the Russian 2A42A turret which has a 30mm cannon and coaxial 7.62mm machine gun.

While not present at Eurosatory, the company is also marketing its Milosh BOV M16 4x4 armoured vehicle, the prototype of which is currently being tested by an undisclosed foreign customer.

While the vehicle has not been ordered by the Serbian armed forces to date, Stojanovic commented that ‘maybe the Serbian army will use it in the future’ as the force continues to incrementally modernise and replace its land capabilities......Continue reading: HERE